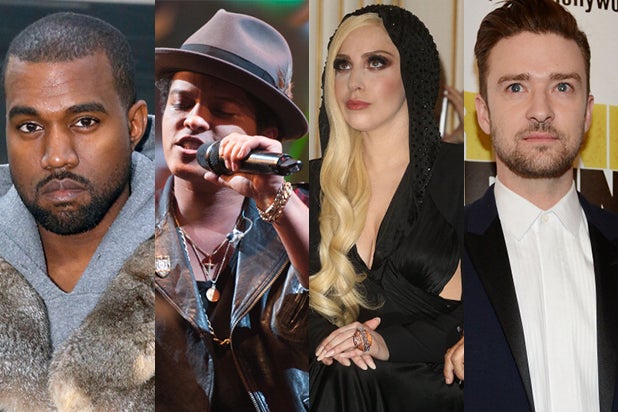 Viewers of the American Music Awards: don’t expect to see as much Justin Timberlake on Sunday night.

The nominees for the 56th annual Grammy Awards were revealed on Friday, Dec. 6, and in our attempt to make sense of it all, TheWrap immediately sought out Damon Williams, vice president of Programming & Content Development at Music Choice to determine the 10 biggest snubs and surprises leading up to Music’s Biggest Night. Here’s the breakdown:

Snub: “Applause”
OK, so Lady Gaga and “ARTPOP” didn’t exactly make a splash in 2013. Although the meat-wearing-when-she’s-not-naked artist’s album’s Nov. 6 release date missed the Grammy cut-off, the better-received single, “Applause,” came out well earlier — at the exact same time as Katy Perry‘s “Roar.” And Gaga’s pop song as a standalone is a pretty good one, and isn’t exactly an unknown. Williams thinks “Applause” belongs alongside Perry’s hit in the Best Pop Solo Performance category, though he admits Gaga “tried to go head to head with Katy, and lost.”

Snub: Bruno Mars “Unorthodox Jukebox” for Album of the Year
How did this album not qualify for the cut? After all, Mars is nominated for several hit songs … yet not the well-rounded album that houses them? Not cool, says Williams. We agree.

Snub: Imagine Dragons for Best Rock Album
Williams is disappointed in the lack of “youth movement” in the rock album category. And who can argue with him? Here are the non-Kings (of Leon) and non-Queens (of the Stone Age) Best Rock Album nominees: Black Sabbath, David Bowie, Led Zeppelin and Neil Young. What year is this? We’re not saying they’re old, but their movie tickets are a lot cheaper than yours.

Snub: Florida Georgia Line featuring Nelly, “Cruise”
This song was everywhere in 2013 — except for the Grammy nominations, apparently. Williams lamented the general lack of  youth in this category as well. It’s an all-time great crossover track; put ‘em in an envelope, Grammys!

Snub: Justin Timberlake‘s Got No Rhythm or Blues (Album), Apparently
The man who won the American Music Award for Favorite R&B Album isn’t even nominated for a Grammy in the same category. Um, what? OK, so we know the two awards shows are different, and obviously their voting processes are not simpatico, but if anyone should take home a compilation trophy at both awards shows, it’s Justin. Crazy oversight. The Grammy’s noticed JT in the R&B Song category (one out of five in the genre), so he still may take home another sweet paperweight — but it’s not the same.

And then there were the surprises, some pleasant, some … not so much:

Surprise! Daft Punk, “Random Access Memories” Nominated for Album of the Year
“Not one of their greatest albums,” Williams simply put it to TheWrap. The nomination seems to rely pretty heavily on the existence of “Get Lucky,” which itself leaned firmly on the greatness of Pharrell Williams, who is having an absolute monster year. Still, being nominated for a super-catchy track and being nominated in the night’s biggest category are two very different things. Just ask Robin Thicke.

Surprise! Kendrick Lamar Love
See, not all surprises are bad. The multiple nominations for Lamar were a huge leap in the right direction, Williams said. Williams made no bones about it — the guy really wants to see the talented young Compton rapper take home a statue on Sunday. Though Macklemore & Ryan Lewis will probably have something to say about that in shared categories. But on a positive note, both hip-hop acts getting nominated all over the place Friday night was nice to see from an Academy that tends to skew older and reward name rappers, like our next noms …

Surprise! Jay Z and Kanye West for Best Rap Album
OK, these nominations were not at all really surprising — though that doesn’t mean they were completely deserving. West was actually trying hard to not make a popular album full of singles and he still got the nod here. Perhaps getting new blood in there by way of J. Cole would have been a nice “Surprise.”

Surprise! Sara Bareilles Will Take on Katy Perry
Bareilles’ project just didn’t resonate with Williams. Did “Brave” make it to Best Pop Solo Performance against Katy Perry simply because the two songs famously sound exactly alike? That part isn’t Bareilles’ fault, since hers came first. But “The Blessed Unrest” also got the huge Album of the Year nod. Did you expect that? Did Bareilles even expect that?

Surprise! Alicia Keys in R&B
“Girl on Fire” is “definitely not one of her better albums,” Williams told TheWrap of Keys’ latest. And the man who serves as the Chairman of the Board of the Rhythm and Blues Foundation should know. The bigger issue: Keys personifies the whole R&B category, which Williams says consists of “a lot of people who have been around for a long time … who have a just OK album” this time around.

“You just don’t see the depth,” Williams explained in his main category of expertise.

So we’ll ask again: Shouldn’t there be more Timberlake?