The Grammy nominations for 2022 were announced on Tuesday morning, and Jon Batiste led the pack with 11 nominations in all, while Justin Bieber, Doja Cat and H.E.R. each scored eight. Billie Eilish and first-time nominee Olivia Rodrigo, who was in the mix for Best New Artist, each scored seven nominations.

In a surprise twist announced on Tuesday along with the nominations, the big four categories in the general field, including Album of the Year, Record of the Year, Song of the Year and Best New Artist, have expanded from eight nominees to a field of 10. The change caps off a year in which the Recording Academy has revamped its membership and voting process in an effort to boost diversity and a more inclusive, representative field of nominees.

Those efforts arguably paid off on Tuesday with the nominations for Batiste, who is the bandleader for his band Stay Human on “The Late Show With Stephen Colbert.” His 11 nominations this year (of 14 in his career and no wins), spanned seven different fields and genres, and he landed key nominations for Record of the Year for “Freedom” and Album of the Year for “We Are,” not to mention a nomination for his work on the score for the Pixar film “Soul.” 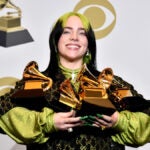 This year’s Record of the Year category included tracks from ABBA, who released their first music in years, Batiste, Tony Bennett & Lady Gaga, Bieber, Brandi Carlile, Doja Cat featuring SZA, Eilish, Lil Nas X, Rodrigo and Silk Sonic. Many of those artists were also included in the Album of the Year category, as was Taylor Swift with “Evermore” and Kanye West with “DONDA.” 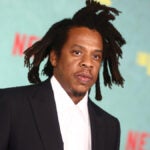 For Bieber, he now brings his career Grammy nominations to 22 and has two wins, but this is the first year in which he’s earned nominations in three of the four general category fields, and he’ll be competing on behalf of his album “Justice” and Record and Song of the Year nominee “Peaches,” featuring Daniel Caesar & Giveon.

Eilish too is on a roll, as this is her third consecutive year in which she’s been nominated in Record of the Year and Song of the Year, taking home the prize for “Bad Guy” two years ago and “Everything I Wanted” last year.

More than 11,000 Recording Academy voting members from all fields of creators and disciplines vote for the Grammys, and this year a total of 21,730 eligible entries were submitted for Grammy consideration.

This year, the Recording Academy changed a number of rules, including tweaking those for eligibility, for voting in categories and most importantly, eliminating the controversial secret nominating committees that have dictated the final field of nominees. Many members also had to re-qualify for membership this year as the Academy pushed for more diversity, and this year’s Grammys ceremony will even feature an inclusion rider for people working behind the scenes on the show. 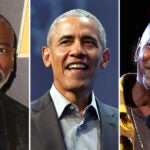 Last year, Beyoncé made history as the most winningest female artist in Grammy history, picking up her 28th trophy and tying Quincy Jones with the most wins for a non-classical artist. The top prizes also went to Billie Eilish for Record of the Year for “Everything I Wanted,” Album of the Year to Taylor Swift for “Folkore,” Song of the Year for H.E.R. on “I Can’t Breathe” and Megan Thee Stallion for Best New Artist.

The Grammys will air on January 31, 2022 on CBS, as well as stream on-demand on Paramount+.