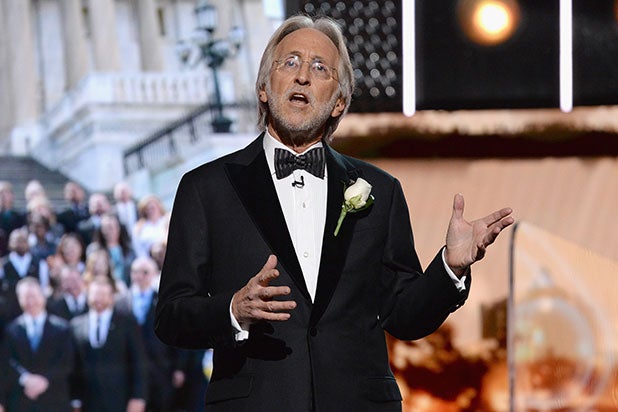 Recording Academy president Neil Portnow has backpedaled on comments he made after Sunday’s Grammy Awards that women need to “step up” to improve the music industry’s glaring gender imbalance.

In a statement to Variety, Portnow said, “Sunday night, I was asked a question about the lack of female artist representation in certain categories of this year’s Grammy Awards. Regrettably, I used two words, ‘step up,’ that, when taken out of context, do not convey my beliefs and the point I was trying to make.”

He added, “Our industry must recognize that women who dream of careers in music face barriers that men have never faced. We must actively work to eliminate these barriers and encourage women to live their dreams and express their passion and creativity through music. We must welcome, mentor, and empower them. Our community will be richer for it.

“I regret that I wasn’t as articulate as I should have been in conveying this thought,” Portnow continued. “I remain committed to doing everything I can to make our music community a better, safer, and more representative place for everyone.”

On Sunday following the Grammys, Portnow was asked why only one woman, Alessia Cara, won a solo award during the telecast. Rihanna, meanwhile, shared the award for Best Rap/Sung Performance, and accepted with Kendrick Lamar for “Loyalty.” She was featured on the song.

Also Read: Moby Calls Out Grammys Artists: 'Musicians, You Have a Voice, An Audience, And You're Wasting it'

“It has to begin with… women who have the creativity in their hearts and souls, who want to be musicians, who want to be engineers, producers, and want to be part of the industry on the executive level… [They need] to step up because I think they would be welcome,” Portnow told Variety on Sunday.

“I don’t have personal experience of those kinds of brick walls that you face but I think it’s upon us — us as an industry — to make the welcome mat very obvious, breeding opportunities for all people who want to be creative and paying it forward and creating that next generation of artists.”

His comments drew criticism from various recording artists, including Pink, who wrote, “Women in music don’t need to ‘step up’. Women have been stepping up since the beginning of time. Stepping up, and also stepping aside … When we celebrate and honour the talent and accomplishments of women, and how much women step up every year, against all odds, we show the next generation of women and girls and boys and men what it means to be equal.”

Sheryl Crow added, “I wish the #Grammys would return to female/male categories. Who will young girls be inspired by to pick up a guitar and rock when most every category is filled with men? I’m not sure it is about women needing to “step up”, (as said by the male in charge).

See reactions to Portnow’s comments below. A spokesperson for the Recording Academy has not yet responded to TheWrap’s request for comment.

I wish the #Grammys would return to female/male categories. Who will young girls be inspired by to pick up a guitar and rock when most every category is filled with men? I'm not sure it is about women needing to “step up”, (as said by the male in charge). #GrammysSoMale https://t.co/v1rvbT3pCC

Neil Portnow really has me heated with his "women need to step up" Grammy-Boys-Club bullshit statement.

IF YOU’RE DEBATING WHETHER OR NOT I CAN MURDER A STAGE… COME SEE IT FOR URSELF ????https://t.co/BeS8VYTynn

ugh bout 2 step up on 2 ur face.. women are making AMAZING music right now wtf is this dude talking about ????? https://t.co/EkijTA33QW

Neil’s comment was absurd. Female artists came HARD in 2017. But the nominees are selected by peers and their opinion of the music. Which means it’s a conversation about the standards of which the ENTIRE INDUSTRY expects women to uphold.