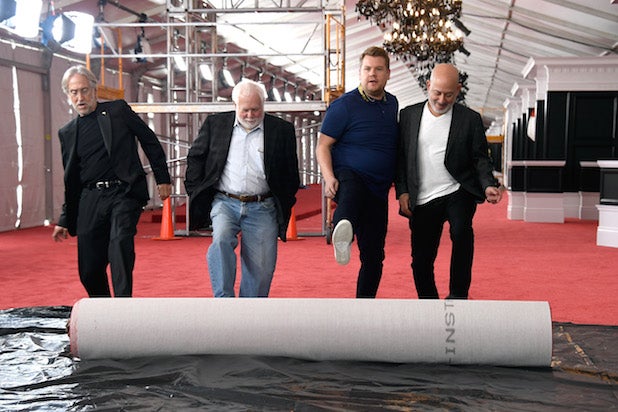 As the 59th Grammys approach on Sunday, a number of questions hang in the air.

How will host James Corden do stepping into the shoes of LL Cool J, who has hosted the last five Grammys?

How political will the show get?

And will they make it through the In Memoriam segment without using the late Leonard Cohen’s “Hallelujah?”

Inside the Staples Center in downtown Los Angeles on Thursday were a few people who know the answers, or at least might be able to hazard a guess. And on the subject of politics, the answer was clear.

“Honestly, I hope it will be a political show,” said longtime Grammys producer Ken Ehrlich, sitting in the Staples audience during rehearsal.

“I’d much rather have an artist come up and express their feeling than thank their manager, agent, publicist and lawyer,” Ehrlich continued. “One of the tenets of the Recording Academy is protecting artistic freedom. So if that’s what we say, we have to walk the walk.

“We live in an extremely polarized time, and it would be artificial if we didn’t allow people to speak.”

Still, Ehrlich added, the politics will likely be coming from winners’ speeches, not from anything the Grammys are building into the show. “Over the past several years, we have been in an advocacy position with songs about gay marriage and campus violence,” he said. “We have tried to call attention to some issues. But here, I think we’re really a platform and a conduit to allow artists to speak out.”

Thursday, Friday and Saturday were scheduled to include rehearsals for Corden and almost three dozen performer, with a dozen collaborative performances including a couple of the genre-hopping combinations for which the Grammys are known. (Lady Gaga + Metallica = who knows what?)

There’s R&B and EMD, country and soul, rap and gospel — and above it all, perhaps, are pop music’s two grand one-name divas, Beyonce and Adele, whose performances figure to be among the night’s biggest moments.

And while this year’s show won’t face the spate of high-profile deaths that happened in the few weeks leading up to last year’s Grammys, from David Bowie to Glenn Frey to Maurice White, the show definitely won’t let the work of artists like Prince go uncelebrated.

“Last year, there were a half a dozen really significant artists who passed away between December 31 and the show,” Ehrlich said. “We kind of got caught up — because of the proximity of their deaths to the show, we decided that we wanted to be responsive. So we wound up doing a lot.

“I came into this year thinking that we need to be mindful not to let the show turn into a memoriam. It’s a whole room full of people, not to mention millions of people who are watching the Grammys, because they want to see a music show about what happened this year. So this year, there will be fewer of those moments, but they’ll pretty impactful.

After all, he noted, “I couldn’t get through the show this year without doing George Michael or Prince — that’s pretty much a given.”

And what about “Hallelujah,” the go-to song since that legendary songwriter’s passing in November? “I’d like to think that we’re kind of known for not doing things that are right on the money,” said Ehrlich. He declined to say that the song would never be heard, but said he had something else in the works for the In Memoriam montage.

“One Saturday I was listening to music and thinking about what we could do for In Memoriam, and ‘God Only Knows’ came on, and all of a sudden it hit me,” he said. “If you think of the words not in the context of lost love, but loss, it takes on a whole new meaning.

“So I went to John Legend and to Cynthia Erivo from [Broadway’s] ‘The Color Purple’ and said, ‘I’d like you to do the song out of tempo, slow.’ I’m telling you, it’s so beautiful. And yes, I’m sure some people will say, ‘Why didn’t they do “Hallelujah?”‘”

Inside the Staples Center, meanwhile, a few dozen people in the audience and another large team on stage ran through several rehearsals with Alicia Keys and country artist Maren Morris. The first rehearsal was casual, with Keys holding her 2-year-old son, Genesis, in her arms as she sang — but by the end, the two were turning in a full-throated and dramatic performance on a huge stage festooned with chandeliers and a (temporary) grand mansion look.

Then the stage crew removed the chandeliers and reset for James Corden‘s entrance, which was preceded by a stern warning from head stage manager Garry Hood. “No cameras, no social media, no taping by our crew,” he announced to the small group of onlookers. “Put your phones away or we’ll take them from you — and we promise that you’ll get them back by Christmas.”

So we can’t tell you anything about how Corden will make his first appearance on stage, except that it’s elaborate and it involves other people. Oh, and he won’t be singing, all those “Carpool Karaoke” segments notwithstanding.

“The show is going to take on the personality of James, to a certain extent,” said Ehrlich. “He’s a pretty dynamic individual, and I think he wants to be present. He doesn’t necessarily want to take ownership — he understands that the Grammys are the Grammys, not the James Corden show. But I think it’ll definitely have his stamp on it, which I’m really pleased about.”

Also Read: James Corden and Sting Duel It Out as Singing Waiters (Video)

As Ehrlich got up to leave Staples Center to go next door for a rehearsal of a Bee Gees tribute timed to the 40th anniversary of “Saturday Night Fever,” the phone in his pocked buzzed.

“Hold on one second,” he said. “Something big just happened.” He checked the phone, and nodded. “This is important. Ninth Circuit Court of Appeals will deliver a ruling today on the Trump administration travel ban.”

He grinned. “Well, better today than Sunday at 8 o’clock, that’s what I say.”