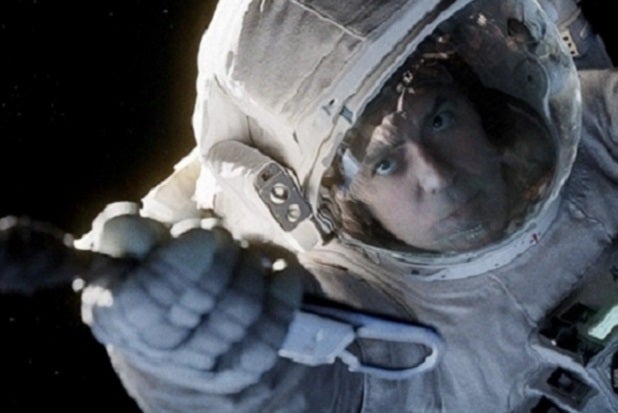 The 3D space saga “Gravity” was hurtling toward its third straight weekend box office win Saturday, beating out the horror remake “Carrie” on its way to a three-day total that could hit $30 million.

Warner Bros.’ Sandra Bullock-George Clooney thriller brought in $9 million Friday, easily topping the Chloe Grace-Moretz chiller from MGM and Screen Gems, which brought in $6.6 million in its debut and is looking at around $18 million for the weekend.

Alfonso Cuaron’s space saga remains in a market-high 3,820 theaters, roughly 80 percent of which are 3D or Imax, and its Friday total was off just 28 percent from last Friday, another very strong hold. Its domestic total is up to $148 million, and should hit $250 million worldwide this weekend.

Sony’s “Captain Phillps,” like “Gravity” a mature-skewing Oscar hopeful, was running third in its second week, ahead of the weekend’s two other wide openers, “Escape Plan” and “The Fifth Estate.” The Tom Hanks modern-day piracy tale held well and is on pace for a $17 million second weekend after bringing in $5.1 million Friday, a roughly 40 percent drop from last week.

Summit’s Sylvester Stallone-Arnold Schwarzenegger R-rated prison-break drama brought in $3.3 million from 2,883 locations Friday and should wind up at around $10 million, in line with low expectations.

Disney’s “The Fifth Estate,” starring Benedict Cumberbatch as WikiLeaks founder Julian Assange, tanked Friday with a dismal $587,000 from 1,769 theaters. It will finish the weekend with less than $2 million and be a loser for DreamWorks and Participant Media, which co-financed production of the $26 million thriller.

“Cloudy With a Chance of Meatballs 2” held well, too, dropping just 29 percent from last Friday with $2.5 million. The S0ny family film is battling “Escape Plan” for fourth place and has taken in $85 million domestically in four weeks.

The overall box office was running about 10 percent behind the same weekend last year and was top-loaded; “Prisoners,” “Enough Said,” “Runner Runner” and “Insidious Chapter 2” rounded out the top ten, but none may top $2 million.

At the specialty box office, Oscar front-runner “12 Years a Slave” took in $274,000 from 19 theaters in its limited debut Friday for Fox Searchlight. That’s a strong but not spectacular $14,415 per-location average for director Steve McQueen’s brutally powerful slavery drama.

Roadside Attractions rolled out Robert Redford‘s “All is Lost” in six theaters and it brought in $25,000 for a $4,158 per-screen average.

The movies that opened wide didn’t thrill their audiences. “Escape Plan” received a “B+” CinemaScore, “The Fifth Estate” got a “B” and “Carrie” got a “B-.”

The Kimberly Pierce-directed “Carrie, a redo of the 1976 film that was based on Stephen King’s first novel and starred Sissy Spacek, received a “B+” from moviegoers under 25 and should stay some staying power through Halloween. When Paramount pushed “Paranormal Activity 5” to next year, it left the holiday horror field to “Carrie,” which was produced for $30 million.

Also read: Julian Assange to the Hollywood Foreign Press: ‘The Fifth Estate Is Going to Fail’

The soft opening for “Prison Break,,” which has a $70 million production budget, means that its weekend will wind up closer to the recent solo outings of the aging action stars than one of Stallone’s “Expendables” movies.  Schwarzenegger’s last outing “The Last Stand” opened to a dismal $6.2 million in January, and Sly’s “Bullet to the Head” did even worse, debuting to $4.5 million in February.

“The Fifth Estate” was at one point considered an Oscar contender. But a lukewarm reception from critics and audiences at the Toronto Film Festival last month killed momentum and its current rating on Rotten Tomatoes is 39 percent. It didn’t help the film when Assange himself, in remarks to the Hollywood Foreign Press Association, said that the film was doomed to fail because its anti-WikiLeaks stance didn’t give moviegoers the kind of underdog story they want.