The guests will be gone, the staff will be gone. Only Chloe, Althena and Hercules — the three swans that inhabit the pond on the grounds will remain when the landmark Hotel Bel-Air closes on Wednesday for a two-year renvovation.

Owned by the Sultan of Brunei and managed by the Dorchester Group, the 63-year-old mission-style hotel has become a destination over the years for a slew of movie stars seeking privacy and exclusivity. It has been home to Marilyn Monroe and Howard Hughes, and a favorite watering hole for Hollywood. (See slideshow, "Hotel Bel-Air, 1946-2009.") 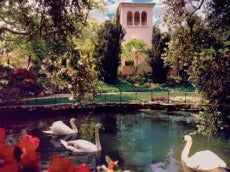 As Sherry Lansing, the former CEO of Paramount Pictures, told TheWrap. “It’s very sad for me. It’s like the loss of a dear friend. It’s always been one of the most beautiful hotels in the world to me.” (Read Sherry Lansing’s Wrap exclusive "Why I Will Miss the Hotel Bel-Air.")

But as with many Hollywood icons, it was time for a little nip and tuck.

"From the guests’ point of view, they think the rooms need a revamp," general manager Tim Lee told TheWrap. "The grand old lady did need a face-lift." The refurbishment, which will be completed toward the middle of 201, will include an updating of all 91 rooms, the construction of a new spa and 12 new villas.

Lee admitted the announcement was greeted with some hesitation. "People are concerned that we maintain a colonial structure, that the red tile roof remain and that we keep the color pink throughout," he said. "We do understand the importance of our property’s internationally zen type of feel, and we want to maintain that. We are going to stick with a very residential type of feel, not making it glitzy and all brass,"
He added that the 12 acres of gardens filled with 135-year-old sycamore trees will remain intact — along with the famed mascot swans.
The Brunei Investment Agency, which also owns the Beverly Hills Hotel and redid that property, conducted a $20 million renovation of the Bel-Air in 2003. Many in Hollywood are hopeful that the Bel-Air renovation will be less jarring than was the Beverly Hills’.
Hollywood memories of the hotel are innumerable.
Julian Myers, a longtime publicity agent, recalled setting up an interview between Los Angeles Times columnist Joyce Haber and actress Bette Davis at the hotel while Davis was promoting the 1971 film "Bunny O’Hare."

"Bette was staying in a special bungalow at the hotel, and the columnist and I went over there and started the interview. It was going OK, and Bette took out a cigarette to smoke," Myers recalled.

"Always a gentleman, I carried matches and jumped up to light her cigarette and she waved me off," he continued. "I realized afterwards that that was part of her bit, her signature — the way she lights a cigarette and has a little trouble starting it, it gave her extra screen time to show what was in her mind and I was ruining her shtick."

Some other Hollywood moments in the hotel’s history:

– Marilyn Monroe lived at the hotel and had her final photo shoot in Suite 261, two weeks before her death. She lived part-time in rooms 133 and 135 during her marriage to Joe DiMaggio.

– Grace Kelly was a resident guest at the hotel before she married Prince Rainier Grimaldi III.

– Liz Taylor had one of her many weddings at the hotel, and in 2003, she hosted a big birthday party with guests including Sen. John Kerry, hairdresser Jose Eber and Michael Jackson’s dermatologist Dr. Arnold Klein.

– Tom Cruise hung out in a bungalow after divorcing Nicole Kidman in 2001 — to hide from the paparazzi as he began dating Penelope Cruz.

– Oprah Winfrey celebrated her 50th birthday at the hotel by having a slumber party. She hosted a luncheon at which she was the guest of honor alongside 50 women, including Diane Sawyer, Toni Morrison, Ellen DeGeneres and Salma Hayek. Nancy Reagan, who had been having lunch at the hotel, stopped by to say hi, and a poem written for the occassion by Maya Angelou made Winfrey cry.

– Ronald Reagan’s daughter Patti Davis wed a yoga instructor in a 17-minute marriage ceremony. Reagan spoke one line in the ceremony, responding, "Her mother and I do" when answering who would give the bride away.

– Joan Collins renewed her wedding vows at the hotel in 2008. Collins, 75, renewed her vows to Peruvian-Scottish theatrical producer Percy Gibson, who is 32 years her junior. The marriage is Collins’ fifth.

– Kate Beckinsale married director Len Wiseman in 2004 at the hotel with 50 guests in attendance for the evening ceremony. The vows took place in a garden under a rose-covered gazebo with hanging votive candles and "Morning Has Broken" by Cat Stevens was played in honor of Kate’s late father before the nuptials began. After the vows, a string quartet played while guests sipped champagne in the garden next to the swan-filled pond.