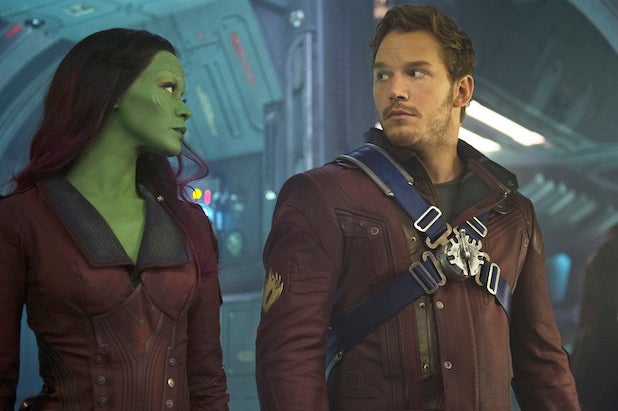 “Guardians of the Galaxy” is on pace to rule the country’s movie screens once more.

The Disney/Marvel release — the year’s top domestic hit — took in $2.709 million on a sleepy Friday night. The James Gunn-directed flick, starring Chris Pratt as the irreverent leader of a rag-tag team of cosmic superheroes, should clear $290 million at the US box office with an additional $8-9 million this weekend.

That’ll be good enough to win the traditionally glacial post-Labor Day weekend, which  suffers from the confluence of football’s return and the industry’s decision to not release anything awards-worthy until October. After all, most of those awards-bait films are currently being feted in Toronto, or are waiting for their spotlight at the New York Film Festival near the end of September.

As a result, there won’t much reason for movie fans caught up (or fed up with) summer blockbusters to return to theaters until much later in the month, when Liam Neeson kicks ass in “A Walk Among Tombstones,” and Jason Bateman and Tina Fey suffer mid-life crises in “This Is Where I Leave You,” both of which release on September 19.

It was a close race for a shabby silver medal on Friday night, with “If I Stay” (WB) finishing with just north of $1.6 million. Fox’s “Let’s Be Cops” made $1.58 million, while Paramount’s “Teenage Mutant Ninja Turtles,” which will get an IMAX re-release next weekend, came in just over $1.5 million.

The weekend’s only new release, the critically pilloried Christian-themed film “The Identical,” looks to be a big flop. The Freestyle Releasing pic, which is reportedly sappier than a maple tree, will likely earn $2 million or so this weekend, enough to earn it a tenth place finish. Last year, the box office’s returns totaled just north of $61 million, and this year’s should be even lower.