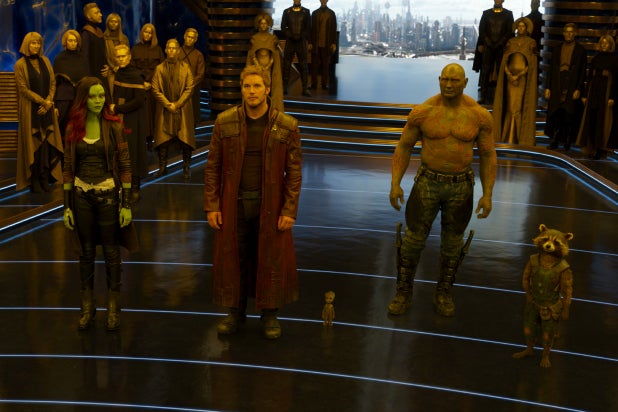 As the Marvel Cinematic Universe continues to expand, it becomes clearer that there are two kinds of films in the series: those that introduce or embellish characters and include events that have ongoing consequences within this on-screen world, and those that merely act as a bridge from one big story point to another, allowing audiences to spend time with beloved characters and to watch some mammoth, special-effects-heavy fight sequences that ultimately don’t add up to much.

The first “Guardians of the Galaxy” falls firmly into the former category, while “Guardians of the Galaxy Vol. 2” fits into the latter. And if you’re a fan of Star-Lord, Gamora, Drax, Rocket and Groot from the first movie, then what “Vol. 2” offers will be enough to keep you entertained with a mix of cranky banter, anti-heroic heroics and some deep dives into the Super Hits of the ’70s.

If you’re not already on the “Guardians” train, of course, this follow-up isn’t going to win you over, nor will it appeal to those who demand that sequels attempt to offer the same jolts of unexpected pleasure that first chapters do. “Vol. 2” is filler, to be sure, but if you like the flavor of these movies, you’ll enjoy this second bite.

We open with our team defending some enormous power-generating batteries from a gargantuan beast; the regenerated Groot (voiced by Vin Diesel), still an infant, blithely boogies to an infectious pop single (which won’t be revealed here) while Star-Lord (aka Peter Quill, played by Chris Pratt), Drax (Dave Bautista), Gamora (Zoe Saldana) and Rocket (voiced by Bradley Cooper, motion-capture performed by Sean Gunn) risk death. Their clients — a gold-hued race who look a planet of ambulatory Oscars — are furious when Rocket steals some of their power supply, leading their queen Ayesha (Elizabeth Debicki, “The Great Gatsby”) to spend most of the movie sending her troops in hot pursuit.

The Guardians have other interstellar fish to fry, particularly after the arrival of Ego (Kurt Russell), who says he is Peter’s long-lost father. Peter, Drax and Gamora follow Ego and his adopted daughter, antennaed empath Mantis (Pom Klementieff), to the home planet he created, apparently using lots of old Yes album covers for inspiration. Rocket and Groot, meanwhile, hang back to repair their ship and to keep an eye on the Guardians’ prisoner, Gamora’s homicidal sister Nebula (Karen Gillan).

Returning writer-director James Gunn loads the movie with incident (there’s lots of chasing, fighting and escaping) but not tons of story, which is fine when you have characters whose interplay is so fun to watch. The idea of splitting his ensemble in two and sending each half to a distant part of the universe, however, feels like an odd choice – why sacrifice story for character if the characters don’t get to be together?

(And while we’re asking questions: if Ego can assume any form, why does he “age” from digitally-rejuvenated Kurt Russell in the flashbacks to modern-day silver daddy?)

“Guardians of the Galaxy Vol. 2” is more interested in filling in the details from its antecedent than it is in moving the saga forward; we learn the truth that explains certain behaviors and occurrences from the first movie, and there’s even a little redemption for some characters we maybe only thought were villains. As for our quintet of heroes, they remain engagingly bristly — Bautista is even funnier this time as the brutally irony-free Drax — and they’re offered some emotional moments, most of which feel earned.

When they aren’t earned, however, “Vol. 2” offers an object lesson in the difference between selecting the right pop hit to fit the moment — Ego cites “Brandy” as an illustration of why he couldn’t stay on Earth with Peter’s mom — and allowing the emotional heft of a song to provide feelings that the movie isn’t doing on its own. (There’s some would-be tear-jerking toward the finale where Gunn basically hands the keys over to sensitive soft-rock.)

Not that these shortcomings will bother the Marvel faithful, what with all the insider shout-outs and seedlings for sequels to come. (The closing credits of “Vol. 2” contain more buttons than a bellhop’s uniform.) But to be fair, the testy romantic chemistry between Peter and Gamora and the utterly irresistible adorability of baby Groot go a long way toward keeping the film from feeling like merely a cynical cash-grab.

There is wit and there are explosions, and while none of them represent a step above “Guardians of the Galaxy,” neither do they impugn the memory of one of the freshest and most fun of the Marvel movies. If they’re just vamping until Volume Three, or the inevitable Avengers crossover, at least they’re doing it with some panache.