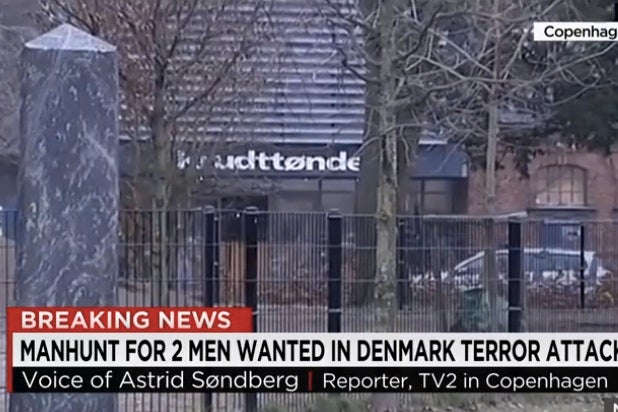 Three people died Saturday and five were injured in separate shootings in Denmark on Sunday, according to media reports. Two died in shootings at a free speech event and at a synagogue, and one was killed at a train station by Copenhagen police while investigating the attacks.

In the first, two gunmen opened fire at a cafe during a free speech event featuring an artist known for caricaturing the prophet Muhammad. Three police officers were reportedly injured.

Danish cartoonist Lars Vilks, who’s been threatened in the past for depicting Muhammad as a dog in 2007, put the event together, but was not hit by the gunmen, police say.

Approximately 10 hours later, one person shot in the head and later died and two police officers were wounded when shots were fired near a synagogue, CNN reported. The gunman ran from the scene, wearing clothes thought to be different from the suspect in the first shooting.

Later, while searching for suspects in the first two attacks, police shot and killed a man who opened fire on them, according to ABC News.

Danish Prime Minister Helle Thorning-Schmidt said of the incident at the Krudttoenden cafe, “We feel certain now that it is a politically motivated attack, and thereby it is a terrorist attack.”

Helle Merete Brix, who founded the Lars Vilks Committee two years ago to defend the cartoonist against outcries against his Muhammad cartoons, told CNN security moved her and others during the shooting at the cafe.

“We have never taken any chances,” Brix said about the group’s security preparation for events. She added that, with Sunday’s shooting, what the group had been “frightened would happen” did happen.

“We heard a number of shots, I’m not sure how many — 30 shots from the room next door, which was the entrance room,” a witness told CNN. “We also heard a person yelling something, I think it was in Arabic language.”

The incident happened a little over a month after 12 were killed as terrorists opened fire at the office of French satirical newspaper Charlie Hebdo.

The gunmen responsible for Saturday’s attack remain at large.