British writer/director Guy Ritchie made his name with the flashy, hyperkinetic indie gangster caper “Lock, Stock and Two Smoking Barrels,” and followed that up with the similarly flavored “Snatch” and “RocknRolla.” Now, armed with a reported $100 million budget, Ritchie has joined the big leagues with his new film, “Sherlock Holmes.”

Predictably, this is not your father’s Sherlock Holmes. Long gone are the traditional — and easily parodied — capes, deerstalker hats and pipes. Instead, as embodied by Robert Downey Jr., the famous detective is now part intellectual sleuth, part action-hero, partnered with an equally slimmed-down and pumped-up Watson, played by Jude Law. 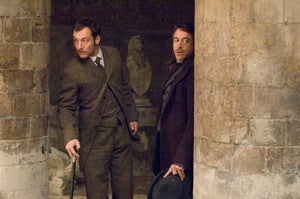 Here, the former Mr. Madonna defends turning Holmes into an action hero and casting a Yank to play the quintessential English detective.
Were you always a big Holmes fan?

I’ve always been a fan. They were the first stories I was familiar with as a boy.
What is it about his continuing appeal?
The sheer depth of the character, as there are so many nuances in him that Doyle managed to pick out. Endearing as he is, he’s also rather vain and arrogant, but somehow that gives him an authentic feeling to him as a character. And the fact that he’s clearly a genius.
Yours isn’t the standard Holmes.
My idea of how he should be portrayed was gestating for decades — and I liked the idea that he’s this very intellectual but also very visceral and physical guy. So he has this sort of marriage between being physical and intellectual, and the fact that he’s flawed makes him so appealing.
And the studio wanted Guy Ritchie-isms, so we had similar ideas and approaches. They wanted more of me, and I wanted more of them.
Are you afraid fans will find this just another effects-laden Hollywood sellout?
No, because I actually tried to stay very true to the original books and characters — and it’s not like I’m not familiar with all the stories. But I obviously have an opinion that percolates through the film.
There was also some initial grumbling about casting an American as the iconic English detective.
Yeah, all that was a bit strange to me, as the whole tradition of acting is based on the idea that you play someone you’re not. (Laughs.) Robert simply was the best guy I could think of to play the role, and he brought a great deal to it. His intellect works at a tremendous pace — much faster than mine — but he’s also very physical. He’s been doing kung-fu for a number of years, he has 3 percent body fat and he’s incredibly limber, so he embodied all the necessary qualities.
What casting about Jude Law as Watson?
Jude actually got coined as “Hotson” quite swiftly during the shoot, because rather than being the traditional Watson who’s this rather bumbling and subservient and rotund chap, he’s an equal in many respects to Holmes. One is a yin, the other is the yang. They complement each other. And Watson was very physical, too. He was a war hero, and I wanted to make that side of the character very conspicuous in the film.
There’s talk of a franchise if this is a hit. Would you be on board to do another?
Well, we’ll have to wait and see. I honestly haven’t given it too much thought yet as I’ve been working so hard to finish this one. But if all goes well, who knows?
So, what is next?
I don’t know. I’m not too good at thinking very far ahead, so I take each day as it comes. In terms of projects, I’m a chicken sitting on a few eggs, and one will crack before the others, so I have to wait and see which one it is. I just keep them warm
x
Looks like you're enjoying reading