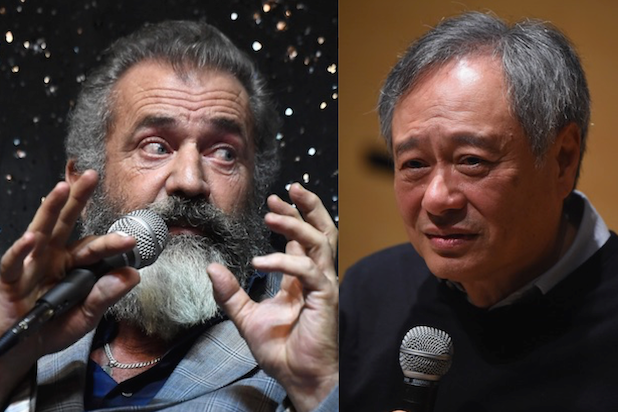 “Hacksaw Ridge” and “Billy Lynn’s Long Halftime Walk” are about as temperamentally and stylistically different as two movies can be, but directors Mel Gibson and Ang Lee are duking it out to get awards attention for their films about men in wartime.

And at the moment, it’s easy to tell who’s getting the best of this particular battle: the former Hollywood pariah, not the prestige director.

Lee’s “Billy Lynn,” a big, bold movie that deals with a group of soldiers back from Iraq, was expected to appeal to voters and become a major factor in the awards race before it premiered at the New York Film Festival in October. The follow-up to the visionary director’s “Life of Pi” (11 nominations, four Oscars), shot in the groundbreaking 120 frames-per-second format, seemed as if it could be a technological marvel and an awards favorite.

But “Billy Lynn” wasn’t embraced by critics in its debut, and early screenings in Los Angeles have similarly dampened any heat it might have generated.

Meanwhile, Gibson’s own big, bold war drama, this one set in World War II, had less heat before its own festival premiere in Venice. The harrowing story of a conscientious objector who nonetheless saved dozens of lives in one of the war’s bloodiest battles, “Hacksaw Ridge” is visceral and crowd-pleasing filmmaking, and the buzz from early screenings suggests that it may be persuasive enough to rehabilitate Gibson’s checkered reputation with awards voters.

It is storming into the awards picture as “Billy Lynn” is slipping out.

For the record, I don’t think either movie is very good. Watching “Billy Lynn” in the 120-frames-per-second format (admittedly not the way in which most viewers will experience it), I found the technology distracting and annoying — and if you can get beyond the look, what’s left is a clunky story that isn’t paced or acted very well. I admire the way in which Lee is trying to find a new cinematic vocabulary to match new technology, but not the vehicle he’s chosen or the way he’s executed it.

“Hacksaw Ridge,” on the other hand, is bravura old-fashioned filmmaking on steroids, with all the zest for violence Gibson also exhibited in “The Last Temptation of Christ,” “Apocalypto” and “Braveheart.” But it is a big cartoon of a movie, with laughably stereotypical characters and ludicrously over-the-top battle scenes that, as Alonso Duralde pointed out in his review for TheWrap, are “sometimes so exhilaratingly overdone that it’s like watching … a Monty Python sketch.”

But in the case of “Hacksaw Ridge,” there’s a big difference between my reaction and the reaction of the guild audience I saw it with, and the reaction of other voters I’ve talked to about it. Nobody is singing hymns to its subtlety, but a lot of people love it nonetheless — and some of those people will be filling out ballots pretty soon.

The film doesn’t have its official Academy members’ screening until Saturday, but an industry viewing in the Academy’s Samuel Goldwyn Theater brought Gibson a rousing standing ovation.

And, crucially, “Hacksaw Ridge” could fill the niche occupied by “American Sniper” two years ago as the movie that becomes a commercial hit by appealing to an audience that normally disdains Hollywood.

The lead character in Gibson’s movie, played by Andrew Garfield, is a Seventh Day Adventist whose faith prevents him from picking up a gun, even in wartime. The faith-based audience that disdains normal Hollywood fare loved Gibson’s “Passion of the Christ,” and it’s possible that they’ll feel the same here.

Also Read: Toronto Film Festival: 10 Films That Got a Boost, 5 That Didn't

“Hacksaw Ridge” still has to contend with residual distaste caused by Gibson’s offensive comments about Jews after his DUI arrest in 2006, though the intervening decade seems to have thawed the chill between himself and Hollywood. And the film is far from a slam-dunk awards contender: I currently have it at No. 11 or 12 on my list of Best Picture possibilities, a lot higher than it used to be but not high enough to get it a nomination.

But Gibson and “Hacksaw Ridge” are in , for sure. And that’s more than you can say about Ang Lee and “Billy Lynn.”