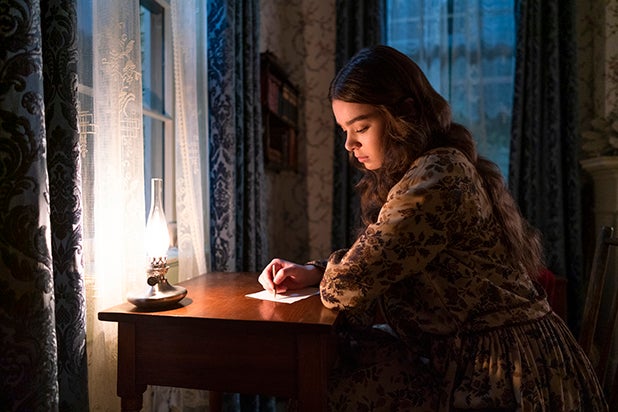 At the age of 23, Hailee Steinfeld is no stranger to the big screen — but the last year has seen her trying out some major firsts. From her television debut to trying her hand as an executive producer for the first time, the star of Apple TV+’s “Dickinson” series reflected on the challenges and rewards of making the drama based on the life of famous American poet Emily Dickinson.

“I thought I wasn’t sleeping before,” Steinfeld joked about serving as both actress and executive producer in a recent interview with TheWrap. “I think before I might have taken for granted a five or 10 minutes break, whereas this was always filled with a phone call or a meeting of sorts.”

In addition to adapting to the much faster pace of TV production as opposed to film, she said the challenges she faced gave her a greater appreciation for how much work goes into the project behind the scenes.

“I feel like I’ve developed a whole new level of appreciation for what goes into making what I do possible, because it’s a lot. Having been on the inside of that this time around was really exciting to see.”

Steinfeld also had the opportunity not only to help choose what music would be used in the series, but to have her own song featured.

“It was cool as an artist, as well, to see that side of things and see how it’s integrated into film and television and what that decision-making process looks like,” she said.

She described having the opportunity to change some of the lyrics to her previously written song “After Life” to echo Dickinson’s life and experiences.

“One of the lines, ‘Dress me in whatever you like, white, play with me,’ that was a reference to the physical constraints that women had in that time and sort of patriarchal society that they lived in,” she said. “They had no choice but to live the way they did.”

It also struck Steinfeld that the issues the characters grapple with within the series’ 19th-century context, such as queer sexuality, women’s rights, and the abolitionist movement, are still being struggled with today — just in different forms.

Also Read: 'Dickinson': How Apple's Experimental Comedy Makes a Millennial Icon Out of a 19th-Century Poet

“It’s so crazy to me that that is the case,” she said. “While making the show, it was something that we didn’t stop having conversations about — how we could not just touch on this subject, but tell the story of these perspectives. The truth is, there are so many facts that are still up in the air as to whether or not they’re true about Emily Dickinson, but one thing we’re confident on that is true is that she was in love with her best friend, and that was Sue, a woman. And what’s so incredible and so pure about their relationship is that it was all about being seen and understood fully and completely, and just being heard. That was the one person who she felt saw her for who she was that was beyond her own family. I love that this show is, at the end of the day, really about not putting people in a box. I truly feel like now, today, in our world, we have come so far, and I do believe there’s a lot more work to be done — but it’s amazing to see and have this show serve as a reminder of how far we’ve come and how far we have to go. I think that’s pretty special.”