“You look at the world of carnivals and it’s pretty sleazy and weird, so a lot of that seeped into my movies,” says Rob Zombie, son of a carnival worker. The carny gig led naturally to a short stint on the set of “Pee-Wee’s Playhouse,” followed by a music career as front man for White Zombie, making him the industry’s first horror maestro with sales of 15 million albums worldwide. The twisted mind behind “The Devil’s Rejects,” “House of 1000 Corpses,” “Halloween” and now “Halloween II,” Zombie originally turned down the chance to direct the sequel but feeling protective of his ghoulish characters, he decided to step behind the cameras a second time.

Here, Rob Zombie (born Robert Bartleh Cummings) talks about real-life horror on YouTube, the cesspool that is television and how “bad taste drives the American Dream.”
How would you define horror’s place in pop culture?
It’s a weird time, and it’s only going to get weirder. There’s so much real violent content just online, on YouTube — whether it’s people breaking their legs in half skateboarding, or people fighting in back alleys, it’s so graphic. You watch somebody get hit by a bus. What do you do? It’s amazing how jaded people are. 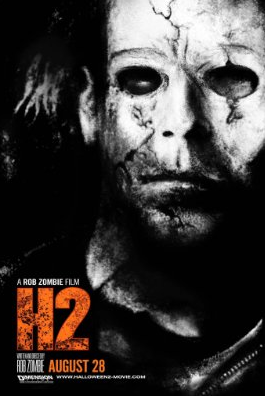 Everything’s just a funny gag, and people are like, “I’m not supposed to care. Why would I care?” So one of the things I try to do is freak people out by developing characters nobody expects you to bother. So that when someone dies, you actually feel kind of bad.
But your movies are so graphic.
You can show a movie to one person and they’re like, “Oh my God, it’s so graphic.” You show it to the next person, they go, “It’s not as violent as I thought it was going to be.” I think maybe sometimes people fill in the blanks with what they didn’t see, which is good. To me, that’s when things are working the best.
The ear-cutting scene in “Reservoir Dogs” …
Yeah, it’s not even there. It’s hilarious.
You run a fine line between cheating fans who want that level of gore and maintaining some civility about it. If you make it too, it runs the risk of seeming like a cartoon. In “Halloween II,” say, when the nurse is getting stabbed, you don’t see a lot of it – the stabbing is mostly off camera, and we just have close-ups of her face. Then what feels intense is the actor’s reaction, not fake blood coming off a fake knife somewhere.
The end of “Halloween II” seems to set up yet another sequel.
I’m not thinking of another installment — I just thought it was a great ending. However you end a movie, somebody interprets it as a set-up for the next one. I could have killed off every single character and people would go, “Ah, what an obvious set-up for a sequel.” But no, to me it’s done. The third one is always a bummer.
Do you find yourself typecast as a horror director?
For the moment, I’m sure I’m typecast. But it’s not so much typecast as everything now is about branding in the world — your brand, your brand, your brand. You’re not a person anymore. And everybody is so confused about how to have a successful anything that when something works, they don’t want to change the formula.
The problem is, it’s not much of a mystery why something’s successful — usually if someone is passionate about a project, and if they put a lot of work into it, and if they do something good, it usually is a success. But nobody looks at it that way. Everybody works out of fear and confusion — everything’s like, “Show up, throw a bunch of s— at the wall and see what sticks.”
It’s a crazy business. It’s total madness where they won’t want to do anything original, yet they will want to remake a movie no one’s ever heard of because that feels like a safe bet, even if the movie they’re remaking is horrible. Where are you f—ing coming from?
Malcolm McDowell has a great line in the movie, “Bad taste drives the American Dream.”
It just seems like things just keep getting worse. Just when you think something can’t get sh—tier, someone finds an even s—tier way to do it. Like a reality show, you’re like, “Okay, ‘Survivor,’ it’s basically a game show. I get it. I understand why people watch it. Okay, ‘American Idol,’ it’s basically ‘Star Search.’ I get it.’ But then it sinks to a new level and the crap that people watch.
I remember as a kid everybody was complaining, “’Three’s Company,’ it’s pure garbage!” “Three’s Company” feels like pure genius compared with the s—t that’s on TV now. I used to love watching TV. It was my favorite thing to do. Now I just sit there going, “S—. S—. More s—. Crap. Crap.” It’s always people who can’t dance, people that need to lose weight, people that can’t sing, some angry chef. It’s unbelievable. Bad taste drives the American dream.
Does all this make you want to turn your back on the industry and work on a smaller scale with greater autonomy?
Well, I get disgusted by it all the time, but I always feel like it’s a battle that can be won. I’m not one who gives up on things. I remember when I first started a band, and you’re on an indie label and people are going, “Oh, if you go to a major label they’re gonna tell you what to do.” I go, “No they’re not. I’m gonna tell them what to do, and I’m going to do what I’m going to do.”
You can’t be scared of every opportunity. But it is exhausting. Sometimes you just feel like, “Man, can’t we just worry about the art part of it? Do we have to make it so difficult?” But I guess that’s just the way it is.