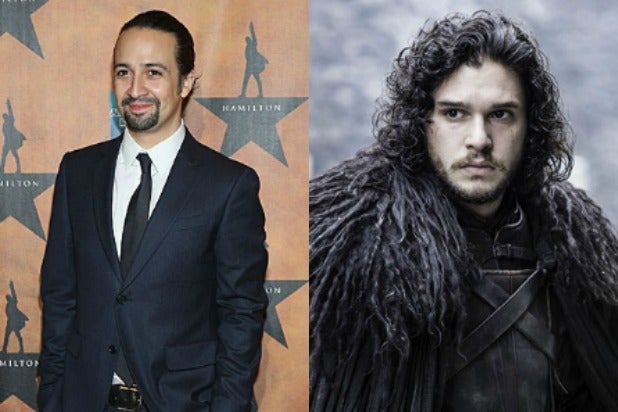 In our mashup-obsessed culture, it seems only inevitable that someone would try to combine “Game of Thrones” and “Hamilton,” considering how the HBO series and Broadway hit have dominated the public consciousness over the last few months. What is more surprising is that the person who actually went and blended the two together is none other than “Hamilton” creator himself, Lin-Manuel Miranda.

On Wednesday, Miranda — who played Alexander Hamilton himself in the Tony Award-winning phenomena — tweeted out a picture of Jon Snow with a caption taken from the lyrics of the “Hamilton” song, “Election of 1800” with the hashtag #HamOfThrones.

In response to Miranda’s tweet, fans of both “Game of Thrones” and “Hamilton” are mashing up Miranda’s words with images from George R.R. Martin‘s world, and Miranda is retweeting some of his favorites, including the Lord Commander elections, Daenerys’ dragons as the Schuyler sisters, and Slavers’ Bay as the cotton plantations of the South.

@Lin_Manuel How to account for his rise to the top? Man, the man is non-stop. #hamofthrones pic.twitter.com/E7GQ2mC5RQ

There’s a little surprise before supper and it cannot wait…#HamOfThrones @Lin_Manuel pic.twitter.com/ag5bb7Ne6m

A CIVICS LESSON FROM A SLAVER, HEY NEIGHBOR, YOUR DEBTS ARE PAID BECAUSE YOU DON’T PAY FOR LABOR #HamOfThrones pic.twitter.com/brg2VxGuZK

Many have underestimated Daenerys Stormborn. Few were allowed to live to regret it

When Daenerys Targaryen left her home in Pentos over 50 "Game of Thrones" episodes ago, she was a meek mouse. Now she's the mighty Queen of Dragons, striving to bring all of Essos -- and perhaps one day Westeros -- to its knees. Her fiery destruction of Vaes Dothrak is just the latest of her most dramatic moments across the water.

Also Read: ‘Game of Thrones': All of The Biggest Moments Of Season 6