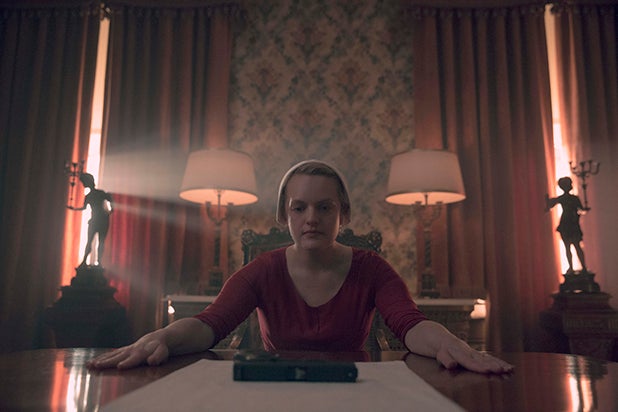 More than 50 children made it out of Gilead on the Season 3 finale of “The Handmaid’s Tale,” titled “Mayday,” and it’s all thanks to June (Elisabeth Moss) who orchestrated a complicated plan with the Marthas and some of the other rebellious Handmaids to smuggle the young boys and girls safely into Canada, and stayed behind to make sure it all went smoothly.

And while she might be the savior responsible for the children’s brighter future in the Great White North, she’s still stuck within the borders of the dystopian society, wounded — though protected by the Handmaids who have grown to become her family — and certainly about to face the music for what she’s done.

“Handmaid’s Tale” creator Bruce Miller told TheWrap that Gilead will “absolutely not” stand for June’s betrayal on the Hulu drama’s upcoming fourth Season, though anger was definitely the response she was going for.

Also Read: 'The Handmaid's Tale' Renewed for Season 4 at Hulu

“This is a world where children at the most valuable resource,” Miller said. “So it’s not even going to be Gilead saying to Canada, ‘Are you going to let these children go?’ It’s an act of war. And it’s not even an act of war that Canada really wanted to do, they kind of got pushed into it by June. They didn’t ask for children, she sent them children.”

And Miller said all of this began because June realized how much effort Gilead, Serena (Yvonne Strahovski) and Fred (Joseph Fiennes) put into trying to get Nicole — her biological and the Waterfords’ *daughter* by the laws of Gilead — back from Canada.

“The arc for June on Season 3 was she saw, ‘Look how they react to one child. Boy, it really hurts them. How can I really hurt them?’ So I think the repercussions and June’s goal overlap a lot,” the showrunner said. “She wanted them to be crazed, heartbroken, shattered — that’s what she was looking for. So that’s good in terms of throwing the show up into the air. But she knew what she was doing. She was trying to hit them where it hurt, and she did. And when people are hurt, they strike back.”

Though June saved a lot of children, she wasn’t able to save Hannah and doesn’t even know where Hannah is at this point. We asked Miller if June — who keeps having opportunities to leave Gilead but has found a reason to stay each time — is going to continue to fight to find her Hannah and if the only way she’ll actually escape is with her daughter. The short answer: “I don’t know.”

“In the book, she never has any contact with Hannah, she just gets a photograph of her,” Miller said. “And then at the end, they kind of indicate she’s helping out or somehow participating in the underground female railroad. So in the book she went on without rescuing her daughter and did continue to help people get out. She put aside not only her own freedom, but her own freedom and the goal of finding her own daughter — which in the book does seem impossible. So in the book it seems like she her profession becomes freedom fighter, not mother-looking-for-child.”

“But for me, it’s the animating factor behind June and even when it becomes impossible, it’s still the animating factor,” he continued. “So on the one hand, you want to save your daughter and get your daughter back because your life is intolerable without her. But on the other hand, what she’s doing with the group of kids is she’s not rescuing Hannah over and over again via metaphor, that’s not what’s happening. What’s happening is her kid is gone, her heart is broken, she wants to break Gilead’s heart. So she’s doing this for pain, not for pleasure. Yeah, the pleasure of rescuing the kids and that noble goal is part of it. But I think really deep down, the reason she’s doing that is to get Gilead involved.”

See more from TheWrap’s Q&A with Miller about the finale below.

TheWrap: There obviously have to be repercussions for June in Season 4 for what she did — but how serious will they be and how could the show and June possibly go back to normal after this?

Bruce Miller: I think there will be serious repercussions. We haven’t quite decided what we’re doing, but all of the discussions last year when we were planning the ending was that there are serious repercussions. There is a version of television that we all grew up with — or that I grew up with — where it was really a Rube Goldberg device. It was a big machine that doesn’t really do anything, but it’s incredibly interesting to watch it operate. Every little mechanism in television is really cool, every story. But really, it kind of resolved itself back to the same emergency room/police station/courtroom drama that it was in before, with basically the same dynamic. It didn’t move forward. Now, that was based on a couple of things, one of them was you didn’t know if you had one season or 20 seasons. And also people expected your show to be the same thing every week. I think that model is gone. When you’re saying what happened to June next, she can’t go back to normal — none of us can, you’re not going to go back to normal after this phone call. I think we have to have our characters live their lives and have their lives mean something or they don’t mean something to the audience. So for June, she’s changed a ton. And is she gonna go back to her life as it was before? No, none of us do. “The Handmaid’s Tale” is about June, it’s June’s journey, we’ll follow June — but where June is going to go next may be very different from where she’s been the past three seasons.

TheWrap: Fred and Serena finally got what was coming to them on the finale with them both under arrest in Canada and Nicole fully out of Serena’s grasp. How did you decide it was time for that?

Miller: I think in, some ways, this is a continuation of the manipulation and control June exerted over that couple. She pushed Fred to repair the marriage and turned Serena’s baby fever up to 11, so this is June’s influence bearing itself out. I think that for June, this is really some of her investments paying off, longterm investments paying off.

TheWrap: Commander Lawrence (Bradley Whitford) decided to stay behind when June and the Marthas went to enact their Mayday plan. He said he wanted to clean up his “mess,” because that’s what his recently deceased wife Eleanor (Julie Dretzin) would have wanted. Is he still going to feel that way when he finds out June stayed behind?

Miller: I’m not 100 percent sure that that’s going to be true in 24 hours. That might be true in the moment, that he wants to clean up the mess. But the thing I know about him is that he’s a survivor, that’s the thing that Fred told us and what we’ve seen. So somehow he’s good at surviving. I think in that moment, he was thinking about his wife but he’s not 100% sure his life would be better in Canada. i think he thought his wife would be better off in Canada, and he’d sacrifice for her, but once his wife died, he realized it might be better if he stayed here.

TheWrap: The series has already been renewed for Season 4, and it’s not labeled the last — but are you thinking ahead to how it will end and do you plan to mimic the epilogue ending Margaret Atwood had in her novel?

Miller: The book– people say, “Oh, you’ve gone beyond the book.” The book goes 200 years ahead of me! The book goes on for a very long time, it tells you lots of things about what happened to Gilead. Is it a happy ending? Well, of everybody we talk to, nobody survives. Nobody in our story survives because Gilead falls much later. It falls after all these people are dead and buried. So I use Margaret’s world as my guide and my light because it works and because the story decisions that she makes are so intelligent. So that’s kind of always where we start. Margaret is a little more encouraging to us to change things than we are comfortable changing things (laughs). We are very happy riding on her coattails and she goes, “Oh you could do this” and we go, “No, it’s awesome!” So I think that we have started, from the very beginning when we started to talk about the book, we talked about the cities in the book that we definitely wanted to see and that’s an amazing part of the book. I just don’t know in the context of the show how it would play. But all of the things that are in the historical notes at the end are things that have guided us all the way along to help us understand what’s going on in Gilead behind the scenes that June doesn’t see, that only the historians in the future would see.