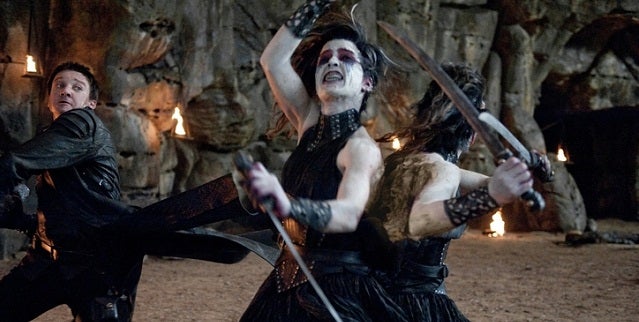 “Hansel and Gretel: Witch Hunters” opened to $6 million on Friday and is leading what is shaping up as a soft weekend at the box office.

That puts the R-rated action fantasy from Paramount and MGM on course for a three-day total of $17 million, closer to the projections of the studios than analysts, who had it doing north of $20 million. The Friday numbers were swelled by midnight Thursday screenings and “Hansel and Gretel” is also benefiting from the premium 3D pricing at roughly 2,900 of its 3,373 locations.

Last week's No. 1 film, Universal's horror thriller “Mama,” was running second after taking in $3.8 million from 2,682 locations Friday. That's a steep 62 percent drop from last week but puts the Guillermo del Toro production on pace for a $10.5 million weekend.

“Parker,” the crime drama starring Jason Statham and Jennifer Lopez from Film District, was beating out the weekend's third R-rated opener, the ensemble sketch comedy “Movie 43.” “Parker” brought in $2.1 million and is on a $6.3 million pace for the weekend. “Movie 43” is looking at $4.3 million for the three days after opening to $1.6 million Friday. Audiences gave “Parker” a “B+” CinemaScore and gave “Movie 43” a “D,” and the two films were fifth and sixth after Friday. Overall, business was sluggish and on its current pace, the weekend will finish down from last year's comparable week by more than 25 percent.

Two Best Picture Oscar nominees were running close for third and fourth. The Weinstein Company's “Silver Linings Playbook,” in 2,641 theaters after adding another 118 in its 11th week, was down just 21 percent from last week. It brought in $2.3 million Friday and is looking at $8 million for the three days. Sony's “Zero Dark Thirty,” on 2,929 screens in its sixth week, brought in the same amount and is looking at a comparable total.

“Django Unchained,” another Best Picture Oscar nominee, was running seventh. It took in $1.3 million Friday and is on pace for a $3.8 million weekend. “Gangster Squad” was next with $1.1 million Friday, followed by Fox's “Broken City,” with $1 million. Both should finish around $3.5 million over the three days.

“Les Miserables” and “Lincoln,” two other Best Picture Oscar finalists, brought in $1 million and $865,000 respectively on Friday, and are on pace to finish with $3.4 million and $3.1 million.