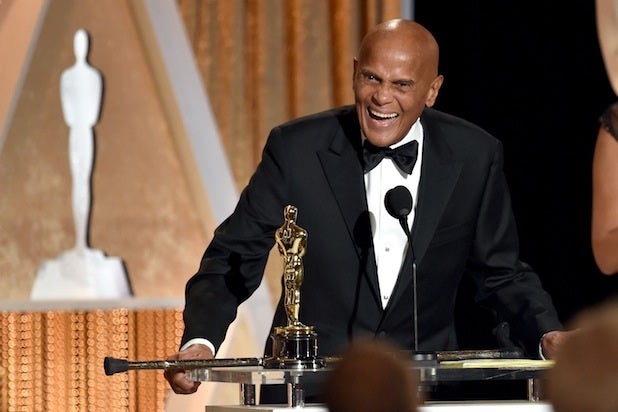 Harry Belafonte called out Hollywood for its treatment of minorities dating back to the 1915 film “Birth of a Nation,” and urged the movie industry to be a catalyst for positive change on Saturday night when he accepted the Jean Hersholt Humanitarian Award at the Academy’s annual Governors Awards ceremony.

But at the end of the night, the buzz in the Ray Dolby Ballroom at Hollywood & Highland was divided between praise for the actor, singer and activist’s speech and protests over a smaller injustice: the decision to take away Maureen O’Hara’s microphone early in the same ceremony.

See video: The Harry Belafonte Documentary ‘Sing Your Song’ Premieres on HBO … and You Should Watch (Video)

O’Hara and Belafonte bookended the Governors Awards, which has become a popular event both to celebrate career achievements with far longer tributes than were possible when honorary Oscars were handed out on the Academy Awards show, and to allow filmmakers and stars from Oscar-contending movies to press the flesh in a room full of Academy members.

Belafonte’s was the longest and fieriest speech, starting with a description of how American cities “went on a murderous rampage” directed at blacks after the release of D.W. Griffith’s “Birth of a Nation,” which depicted post-Civil War Reconstruction and cast the Ku Klux Klan in a heroic light.

It was, he said, “the first film ever screened at the White House,” and it “further inflamed the nation’s racial divide.”

He then mentioned seeing “Tarzan of the Apes,” with its portrayal of a heroic, mute white man raised by apes, who defeated the savages in Africa; Disney’s “Song of the South,” with its racist cartoons; and later films that reduced Native American characters to stereotypes.

“And at the moment, Muslims aren’t looking so good,” he added.

But Belafonte also said film and the performing arts “became the catalyst to fuel my desire for social justice,” and he spoke admiringly of films like “Schindler’s List,” “Brokeback Mountain” and “12 Years a Slave.”

“I really wish I could be around … to see what Hollywood does with the rest of the century,” he said. “It could be civilization’s game-changer.”

Belafonte grabbed the attention at the end of what had until then been a low-key but heartfelt Governors Awards. It began with a brief introduction by Academy president Cheryl Boone Isaacs, and then a presentation in which both Liam Neeson and Clint Eastwood confessed to crushes on Maureen O’Hara, the Irish-born actress who broke into movies in the late 1930s in films like “The Hunchback of Notre Dame” and became best known for “How Green Was My Valley,” “The Quiet Man” and “Miracle on 34th Street,” among others.

O’Hara, who is 94 and frail, was brought to the stage in a wheelchair and haltingly read a speech off several pieces of paper, getting livelier when she talked about how everyone should say little prayers at night to chase the devil away.

When Neeson put the Oscar statuette in her lap, she frowned and said, “What’s this? It’s mine?”

An aide tried to get her to stand and take a bow, but she frowned. “Oh no, you’ve gotta give me a few more minutes,” she said, starting a story about her childhood in Ireland and the local priest. After a few minutes, the aide returned, removed her microphone, helped her stand up for a brief bow, and then wheeled her offstage.

The presentations that followed O’Hara’s were more straightforward, with Walt Disney Animation chief John Lasseter speaking movingly of Miyazaki, who he said stood with Disney as one of the two towering figures in the history of animation.

“Miyazaki-san … is the most original filmmaker ever to work in our medium,” said Lasseter, whose words were echoed in a film clip by a who’s who of current animators, including Dean DeBlois, Brad Bird, Pete Docter, Nick Park and John Musker and Ron Clements.

Miyazaki accepted the award in Japanese, with a translator by his side. “I’ve been lucky to participate in the last era where we can make films with paper, pencil and film,” he said, before ending this way: “But my greatest moment is that I was able to meet Maureen O’Hara tonight.”

“The Right Stuff” director Philip Kaufman gave the award to Carriere, with whom he worked on “The Unbearable Lightness of Being.” It was one of 139 films written by Carriere, who also wrote screenplays for “Belle du Jour,” “The Discreet Charm of the Bourgeoisie,”  “The Tin Drum,” “The Return of Martin Guerre” and “At Play in the Fields of the Lord.”

Thanking the Academy for the award, Carriere said, “Very often, the screenwriters are forgotten. They’re like shadows passing through the history of cinema.”

The four presentations lasted only an hour and 20 minutes, the shortest of the six Governors Awards to date. That left plenty of time for mingling and working the room,

It also led to a lot of spotting of old friends. For example, as Clint Eastwood was explaining to TheWrap how he’d finished “American Sniper” on Friday and turned it in to Warner Bros. that day – “it’s out of my hands now,” he said — he spied a friendly face at the next table.

“Hey, Bobby!” he said, waving at Robert Duvall. Then he was grabbed from the other direction by Hilary Swank, who’d won an Oscar for Eastwood’s “Million Dollar Baby” and is about to appear at the AFI Fest in Tommy Lee Jones’ “The Homesman.”

At other points in the evening, Jessica Chastain found a head on her shoulder belonging to her “Zero Dark Thirty” producer, Megan Ellison; “Birdman” co-star Edward Norton rendezvoused with his “The People vs. Larry Flynt” screenwriter Larry Karaszewski; and “A Most Violent Year” director J.C. Chandor hung out with Roadside Attractions bosses Howard Cohen and Eric D’Arbeloff, who’d released Chandor’s first two movies, “Margin Call” and “All is Lost.”

Other guests included Michael Keaton from “Birdman,” Channing Tatum and director Bennett Miller from “Foxcatcher,” Andy Serkis and Toby Kebbell from “Dawn of the Planet of the Apes,” Logan Lerman from “Fury,” Kevin Costner and Octavia Spencer from “Black or White,” Jennifer Aniston from “Cake,” Robert Downey Jr. from “The Judge,” Patricia Arrquette, Ethan Hawke and Richard Linklater from “Boyhood,” Emily Blunt from “Into the Woods,” Marion Cotillard and the Dardenne brothers for “Two Days, One Night,” Reese Witherspoon and Laura Dern from “Wild,” Keira Knightley from “The Imitation Game” and many more.

“The Theory of Everything” stars Eddie Redmayne and Felicity Jones chalked up another in a nonstop string of events they’re attending before Jones has to head off to make a movie with Juan Antonio Bayona next month, while Jake Gyllenhaal showed up a day before the “Nightcrawler” star takes a red-eye to New York to begin rehearsals for his appearance in “Constellations” on Broadway.

And “Citizenfour” director Laura Poitras – a rare documentary director in the room – shared a hug with actress Tilda Swinton when the two met for the first time after being mutual admirers of each other’s work.

As the crowd thinned out at the end of the night, the night’s highlights differed depending on the viewer. For Chastain, a redhead of more recent vintage, it was meeting Maureen O’Hara, something she said she did as soon as she arrived at the event. For the crop of animators in attendance — Lasseter, DuBlois, Docter, “The Lego Movie” directors Chris Miller and Phil Lord — it was the award to Miyazaki. For “Get On Up” star Chadwick Boseman, it was “the last speech of the night” – i.e., the one delivered by Belafonte.

Meanwhile, “why didn’t they let Maureen O’Hara finish her speech?” was a common theme – and most of those who wondered about why her microphone was removed pointed out that the Governors Awards aren’t televised, so it wasn’t as if the show had to cut to a commercial.

But people rarely leave the Governors Awards feeling upset. Sure, you can quibble with the decision to end O’Hara’s speech, or worry that the event has lost some of the loose, informal feel it had in early years, or fret that the campaign-stop side of the event is becoming a bigger and bigger priority.

(Video footage from the ceremony will, however, be available on the Academy website.)

But it’s a night of celebrating great work, and a night when nobody has to watch an envelope being opened to learn that they’ve just lost. Plus, as presenter Chris Rock pointed out, it has something that’s a pretty rare commodity these days.