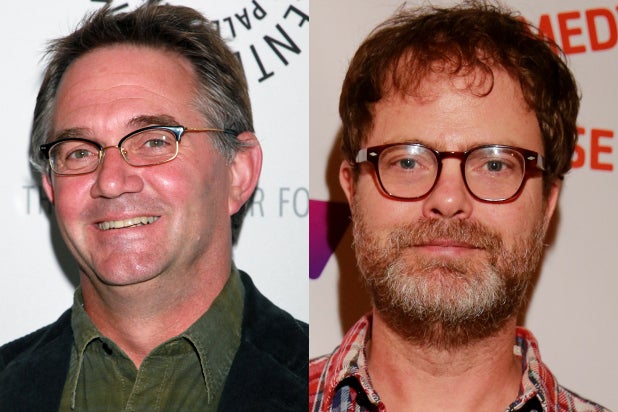 Fox has given a 13-episode series order to “Backstrom,” a one-hour crime drama from 20th Century Fox TV starring Rainn Wilson of “The Office.”

The show, based on Swedish criminologist and novelist Leif G.W. Persson’s hit series of books of the same name is created and executive-produced by Hart Hanson (“Bones”). The series centers on Detective Everett Backstrom (Wilson, a three-time Emmy Award-nominee): an offensive detective who tries, but fails, to change his self-destructive behavior. Backstrom leads the Serious Crimes Unit as they navigate Portland’s most sensitive cases.

Persson, whose book series has sold more than six million copies in Scandanavia, and Niclas Salomonsson will exec produce along with Hanson. Emmy Award-nominated director Mark Mylod (“Entourage,” “Shameless,” “Ali G Indahouse”) served as director and executive producer on the pilot. Production is scheduled to begin in early 2014.

“Hart Hanson and Rainn Wilson are the perfect combination of creative vision and on-screen talent to bring this one-of-a-kind character and story like ‘Backstrom’ to Fox,” said Kevin Reilly, chairman of Entertainment, Fox Broadcasting Company. “I’ve been in business with Hart for a long time, and not only does he have a rare gift for infusing darker themes with relatable humor, he’s one of the best showrunners out there today. Together with Rainn — who absolutely nails this role and makes it a classic Fox character — I think we’ve got something really special here.”

“I couldn’t be more thrilled to get a chance to dig into Detective Everett Backstrom,” Wilson added. “For an actor it’s rare to get a crack at a role of such intelligence, humor and complexity. He’s a delightfully disheveled misanthrope with a twisted, brilliant mind and a heart of barbed wire.”

Wilson continued, “Hart Hanson is an incredible writer and showrunner and I couldn’t be more excited to collaborate with him. Last but not least, Fox is the PERFECT home for this fun and disturbed piece of entertainment. They are passionate about the show and I’m ecstatic to be working with Kevin Reilly again (he launched “The Office” on NBC and fought tooth-and-nail for us to stay on the air, let’s not forget) and to be on the same network as my frenemy, Mindy Kaling.”