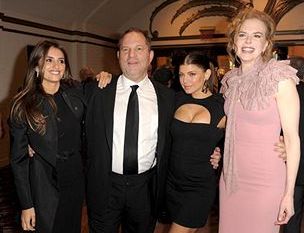 Since Day-Lewis couldn’t make it to the film’s screening at the Mann Village Theater on Wednesday night, producer Harvey Weinstein stepped in to play the proverbial “fulcrum.” (At left, "Nine" stars Penelope Cruz, Fergie, aka Stacy Ferguson, and Nicole Kidman play “Harvey’s Angels.” All photos by Getty Images) 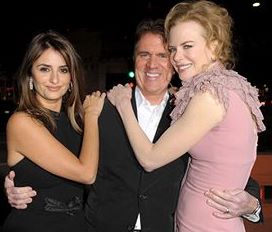 "Nine’s" Kate Hudson didn’t make it to Westwood (nor did Alex Rodriguez). But Marshall got his own star sandwich (right).

The original "Nine" earned 12 Tony nominations on Broadway. The film premiere drew a fair number of stars who aren’t in the movie, but have “legit” DNA. Idina Menzel and Taye Diggs (who met playing in “Rent” together in the ‘90s) hit the carpet, as did 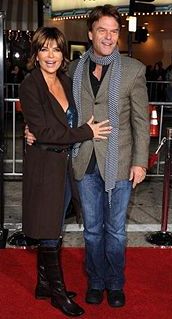 Lisa Rinna and Harry Hamlin (left), who guest-starred together in “Chicago” a few years ago.

If you haven’t personally starred on Broadway, you can see the movie after opening presents (or eating Chinese food) on Christmas Day.

Post-credits, most of the crew rolled east to the Sunset Tower for an intimate VIP supper party.

With this authentic East Coast weather, guests like Jeremy Piven — a veteran of Chicago winters — would have been excused for looking for a coat check. On Sunset Boulevard, we don’t have those. Hamlin resorted to wearing a scarf indoors.

Unsurprisingly, the most popular party real estate was heater-adjacent. "Heroes’" Masi Oka camped out at a heated table, speaking Japanese with his guest. Inside, Ferguson stayed on her heels all night for a steady stream of huggers. Husband Josh Duhamel rode shotgun.

A disarmingly cheerful host, Weinstein stood by the exit as it got near midnight, offering personalized farewells in a reverse receiving line. Before stepping out in to the cold, at least guests got a warm Weinstein farewell: “Thank you … Have a good evening.”