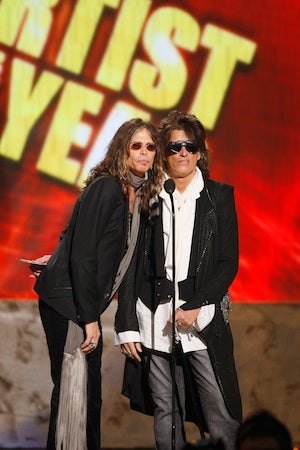 Has Aerosmith reconciled with Steven Tyler?

"In the early days of Aerosmith we were infected with the vibe coming out of the UK with The Yardbirds, Blues Breakers, Pretty Things and the Stones, and we wanted what they had bad," says Steven Tyler. "So baby, we¹re coming home. Rock & Roll can be pure sex and we can¹t wait to Download … "

And on Wednesday, drummer Joey Kramer tweeted "Aerosmith is back!"

Things weren’t so rosy in the past few months after the Aerosmith frontman injured himself falling from a stage in August and several shows were canceled. Guitarist Joe Perry started advertising for a new singer, and both sides took the ugly fight public.