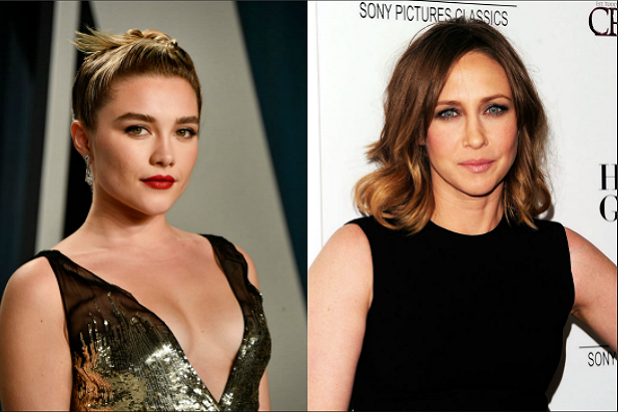 Florence Pugh will reprise her role of Yelena Belova from “Black Widow” and join Marvel Studios’ upcoming Disney+ series “Hawkeye,” according to an individual with knowledge of the project

Vera Farmiga is also in talks to join the cast. She would play Eleanor Bishop, the mother of Kate Bishop, who will be played by Hailee Steinfeld.

Fee will play Kazi, which is most likely the mercenary villain known as Kazimierz Kazimierczak, who goes by the moniker Clown. Dalton will play the role of Jacques Duquesne (aka Swordsman), who serves as an early mentor to Hawkeye. Newcomer Cox is making her on-screen debut as Maya Lopez (aka Echo), a deaf Native American who is capable of perfectly copying another person’s movements. McClarnon will play William Lopez, Maya’s father Willie “Crazy Horse” Lincoln from the Marvel comics.

The upcoming Disney+ series will see Jeremy Renner reprise his Marvel Cinematic Universe role as Clint Barton/Hawkeye, following the events of “Avengers: Endgame,” and will see him train Kate Bishop to take over his mantle. Bishop will also be making her MCU debut in the “Hawkeye” series. Although both Marvel Studios and Disney did not confirm Steinfeld’s casting yet, the series is currently in production in New York and multiple fan sites published a bunch of set photos on Wednesday of Renner and Steinfeld in action on a Brooklyn subway platform.