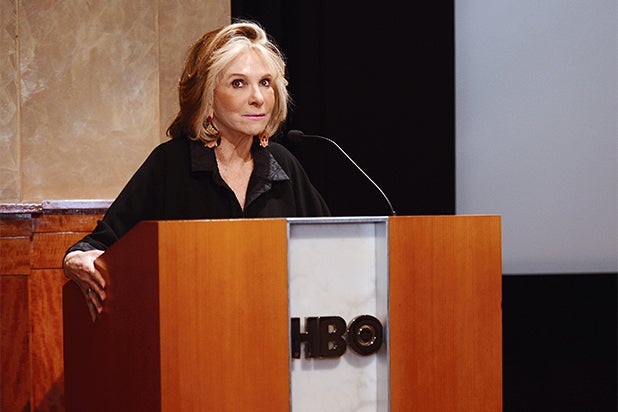 Sheila Nevins, the lauded documentary maven of HBO, recently told “CBS” that she slept with her bosses early in her career. “I don’t know that I slept my way to the top, but I didn’t not sleep with my bosses in the early days, when they wanted me,” she said in an interview with Lesley Stahl of “60 Minutes.”

However, with the rise of feminism, and taking inspiration from Gloria Steinem, Nevins said she ditched what can be described as a “Mad Men”-era strategy and began succeeding on her own merit.

“It just splashes you in the face and you say, ‘Why have I done this? Why am I wearing tight jeans to work? Why am I starving myself on some diet? Why am I sleeping with the boss? And why am I thinking that’s the way to go up?’ And it was the way. It worked. I would love to say it didn’t work. It would be so appropriate, so now. But it worked,” Nevins said.

Nevins is the president of HBO Documentary Films, and is responsible for several hit documentaries, including “Going Clear” and “The Jinx: The Life and Deaths of Robert Durst.” She has won 65 Emmy Awards and her productions have garnered 26 Academy Awards.

Early on at HBO, Nevins developed the series “Real Sex” and “G-String Divas,” which received backlash for their portrayal of sex work. She said that colleagues asked her, “How could you?” But Nevins found that there were far bigger issues. “Why not? Well, who was getting hurt? The real pornography of life is living without healthcare; it’s not sliding up and down a pole for a buck,” she told Stahl.

Nevins, now 78, is still heavily involved in the documentary process at HBO. She also has a new book of essays: “You Don’t Look Your Age… and Other Fairy Tales” (Flatiron Books).