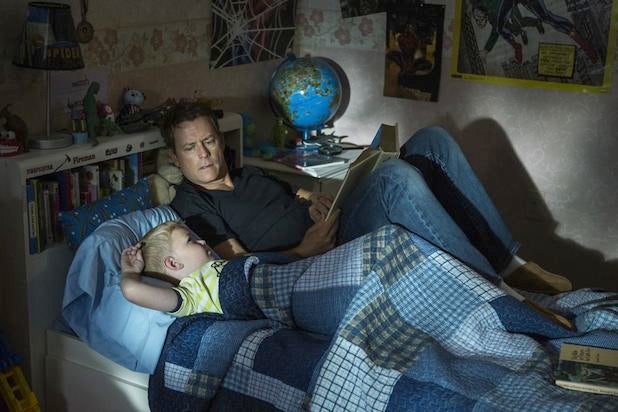 “Heaven Is for Real” is really dividing critics, but at least none of them seemed to hate it. Although, not very many were impressed by the depiction of the club in the clouds that it’s promoting.

The faith-based film stars Greg Kinnear and Kelly Reilly as the parents of a young boy (Connor Corum) who, after suffering a near-death experience, swears that he met Jesus in Heaven. Currently, “Heaven” holds a  54 percent “rotten” rating on Rotten Tomatoes, with a little over half of its 48 reviews reflecting positively on Sony’s Easter weekend release.

Also read: ‘Heaven Is for Real’ Review: Even Skeptics Can Find This Tale Humane and Even-Handed

Director Randall Wallace (“We Were Soldiers”) adapted the Christian concept from pastor Todd Burpo‘s New York Times’ best-selling book of the same name, which recounts Burpo’s journey examining and accepting his son’s claims before sharing the extraordinary story with the world.

TheWrap‘s Inkoo Kang — who identifies herself as an atheist — was among those who felt Wallace did a particularly good job of making a religious film that pleases the obvious demographic, as well as those without any particular creed.

“Wallace smartly leaves room for skeptics of Burpo’s account to maintain their doubt; what matters most is that audiences understand the film character’s reasons for choosing to believe his son’s vision/dream/delirium,” Kang wrote in her review. “‘Heaven Is for Real’ provides enough circumstantial evidence in favor of Colton’s story that those who wish to follow Todd’s leap of faith may do so. But for this atheist critic, the film is most successful in its ambiguities.”

Los Angeles Times critic Betsy Sharkey felt that the movie, which she called “one of the better faith-based films to come along,” offered a better view of a family dealing with economic and medical crisis than the afterlife.

“‘Heaven’ is sincere to a fault, and the closer it gets to heaven, the more it wavers,” Sharkey wrote. “The film is far better when it stays focused on the family and small-town life. That kind of rooted-in-the-real-world sensibility is what helped propel a book about a miracle into a modern-day phenomenon.”

Village Voice critic Alan Scherstuhl also felt the movie’s traditional vision of Heaven (“angels and clouds and a Jesus who looks like Kenny Loggins in a hotel bathrobe”) were no match for the beauty of its Midwestern setting. However, he did give Wallace and the actors credit where he felt credit was due.

“Unlike many of the features targeted to what Hollywood is calling the ‘faith audience,’ the movie is well-acted and shot, often thoughtful and (intentionally) funny,” Scherstuhl wrote. “Its portrayal of Christian family life is neither sickly sweet nor dreary — Kinnear and Reilly paw at each other with the wholesome horniness of Rob and Laura Petrie. Simply put, there’s no Kirk Cameron to sink it.”

San Francisco Chronicle critic David Lewis had many of the same compliments and complaints, although he concluded the movie “has a tough time getting to the finish line” after praising performances from Kinnear and child star Corum.

“Wallace is less successful with the heavenly scenes, which threaten to get a little cheesy at times. We see billowing clouds and angels and Jesus and bright light, but those images don’t carry as much power as when Colton simply describes what he’s witnessed,” Lewis wrote. “In fact, the images of heaven somehow diminish the impact of the boy’s experience, perhaps because heaven is just too profound for anyone to film.”

Associated Press critic Jessica Herndon gave the movie enough measured praise to conclude it is “likely to please the devout, but won’t entice religious cynics,” because of its wholesome “afterschool special” vibe.

“In the way of gripping dialogue, Kinnear doesn’t have much to work with. We might have expected more from writer-director Randall Wallace, who brought us the Oscar-nominated ‘Braveheart,'” Herndon wrote. “But the material is pretty cookie-cutter and more typical of an afterschool special.”

St. Louis Post-Dispatch critic Joe Williams took a more cynical approach, and not only took notice of the movie’s “real” depiction of Heaven, but took it to task for being so stereotypical.

“To further narrow the movie’s appeal to the Hallmark demographic, blond Colton and a Lithuanian girl who also had a near-death experience describe a Jesus who looks like a blue-eyed Kenny Loggins (The historical Jesus undoubtedly had dark eyes and probably a forked beard),” Williams wrote. “Written, directed and acted by Hollywood pros, ‘Heaven Is For Real’ is a polished little movie with a hopeful message, but when it literalizes the divine mysteries, it opens the door to a Doubting Thomas.”