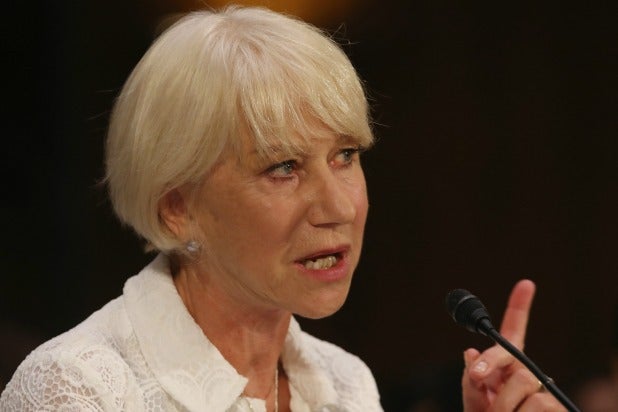 Her testimony came during a U.S. Senate subcommittee hearing in Washington, D.C., on a proposed bill that would help facilitate the return of long-lost pieces of art to their rightful owners.

Also Read: Helen Mirren Thinks 'It's Unfair to Attack the Academy' for #OscarsSoWhite

“It’s a terribly sad fact that, more than 70 years later, victims of the Holocaust and their families are still contemplating whether to seek restitution for what was stolen from them and lost under the most horrible of circumstances,” said Mirren, who was addressed during the hearing as “Dame.”

Still, at one point during the testimony, Mirren fumbled with the microphone and called herself an idiot before regaining her composure.

“Greed, cruelty, self-interest and domination will always be with us,” she said. “Justice is much more difficult, so much more complex, but we all dream of justice.”

“Art restitution is so much more than reclaiming a material good,” she continued. “It is a moral imperative. … It is about preserving the fundamental human condition and the opportunity to reclaim their culture, their history, their memories, and most importantly, their families.”

Sen. Chuck Schumer, a New York Democrat, said “Woman in Gold” had inspired him to co-sponsor the legislation with Texas Republican Sens. Ted Cruz and John Cornyn. “It is a drop of justice in what was an ocean of injustice,” Schumer said.

Cruz took the opportunity to compliment Mirren on her role as Elizabeth II in the 2006 movie “The Queen.” “Marvelous film,” he said.

“There are many issues on which the sponsors of this legislation might disagree,” Cruz said. “But on this issue, I am proud to see bipartisan cooperation, coming together in defense of principles of justice.”

“This was the dirty secret of the post-war art world, and people who should have known better were part of it,” Lauder said.

Also Read: 'Woman in Gold' Review: Helen Mirren Is All That Glitters in This Paint-by-Numbers Saga

It is estimated that the Nazis confiscated or misappropriated tens of thousands of works of art throughout Europe during World War II.