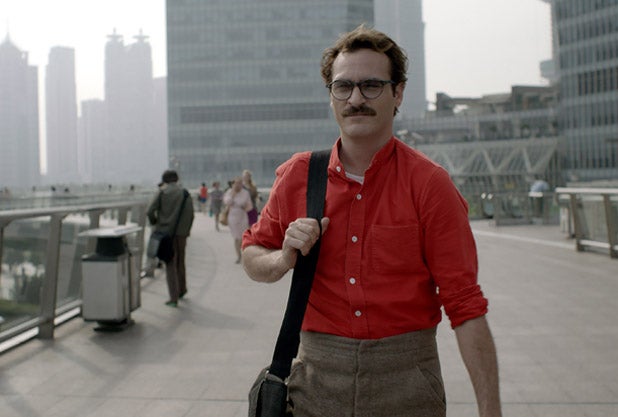 “Her,” Spike Jonze‘s daringly original new film about a man who falls in love with his operating system, unfolds in the not-too-distant future. But instead of crafting a world of hovercrafts, robots and holograms, Jonze and his production designer K.K. Barrett relied on small details to signal the difference between tomorrow and today. The pants that star Joaquin Phoenix wears get buttoned at his midriff, for instance, and nearly every interior looks like an Apple store.

Barrett told TheWrap that the sleek sets and the film’s perpetual rosy glow was motivated by the script’s emotional underpinnings. The picture kicks off with Phoenix’s character struggling to move on from his failed marriage. “The intention was to make a unique world,” Barrett said. “We weren’t motivated by another film’s vision of the future. In some ways I wonder if this world is real at all, or if it just unfolds in Joaquin’s head space as he struggles with looking for romance in a post- breakup situation.”

Also read: ‘Her’ Review: She’s Virtual, But You Can’t Have Everything

The result is a world that is familiar yet distant,  both welcoming and alien. It’s an effect that Barrett achieved in part by eliminating the color blue from the film’s palette, and trying to integrate as much red into “Her” as possible. That particular pigment pops up in everything from the deep reds and oranges of the jacket and shirts that Phoenix sports to the pinkish glow of the sunlight that cascades across the offices and apartments of the imaginary Los Angeles where his character lives and works.

It is the introduction to his new universal operating system, voiced by Scarlett Johansson, that yanks Phoenix out of his intense funk. During the course of their oddball courtship, Johansson is a constant presence. (Yes, the people in Jonze’s futuristic world are just as addicted to their iPhones as we are.)

Cooking up the next generation of mobile devices required the “Her” production staff  to employ a retrograde approach. Phoenix communicates with Johansson through a hearing aid-like earpiece or by carrying a smartphone that is similar in appearance to a cigarette case.

“I’m a huge fan of Apple’s designs, but there’s no way I can beat that,” Barrett said. “They have it to a point where everything is cleaner and sleeker, and there’s nothing left on their devices except for a pure image. Instead of trying create the next iPhone as something even slicker and more minimal, we went in another direction. We tried to make it something pleasing to touch and flip over and fondle. Like a Zippo lighter. We made it more craftsman-like than technological.”

“Her” marks the fourth collaboration between Jonze and Barrett. It’s a partnership that has encompassed all of the maverick director’s feature films, extending from the drab offices in “Being John Malkovich” to the mythical deserts and forests of “Where the Wild Things Are.”

“I just feel lucky to keep getting invited back,” Barrett said. “Spike is very open. He approaches every script, every project as a blank slate, and he’s collaborative in terms of expanding and redefining all the ideas so the picture can emerge in an organic way.” 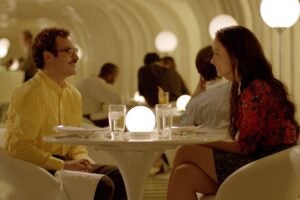 Barrett said he believes that as a production designer his role is to help directors like Jonze establish the mood  of the film by adding sly details that help express the characters’ backstories and emotions. “A cinematographer does it with light; I do it with locations and color and physical things that characters navigate,” Barrett said. “I want to create places that people want to go visit but that exist only in film as a pastiche that we’ve crafted to evoke a certain feeling.”

It would be easy to search for some kind of comment on our times in Jonze’s story of a tender romance between a device user and a disembodied organizational aide. But Barrett says we should resist that temptation. “I think it never crossed Spike’s mind to make a comment about technology,” Barrett said. “The purpose is not to be judgmental about whatever people need to do to feel a connection.

“I hope people take the film for what it is and don’t try to break it up into too many brackets. You should just let it wash over you, experience it and be moved.”