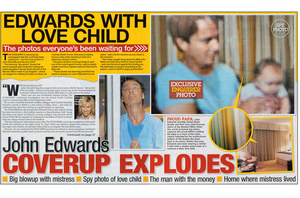 The National Enquirer has finally published a photo – ONE! – of John Edwards, with baby, at the Beverly Hilton Hotel. "The Photos Everyone’s Been Waiting For," says the headline in the online edition of the Enquirer. Hmmmm. I’m hardly satisfied. This single, fuzzy image, labelled "spy photo," begs the question of who shot it, and why. Was it Rielle Hunter’s pal who drove her from Santa Barbara to the hotel last month? Did that person, who was on the inside of this tryst, surreptitiously take the image and sell it to the Enquirer? (And why the sweat-soaked t-shirt please?) Here’s the real kicker: where-oh-where are the photos from the photographers chasing Edwards through the halls of the hotel to the men’s room where he took refuge? Those would back up the Enquirer’s lengthy account of the former candidate’s response to being confronted at the hotel. What is the Enquirer saving those pictures for?

There’s also room to wonder what is going on in smoke-filled rooms at Democratic Party headquarters right now. If Edwards continues to duck questions about this incident, can party leaders possibly allow him to appear at the Democratic Convention and distract from the historic moment of Barack Obama’s coronation? Hardly.

New York Times Watch: Still not a word from the paper of record.