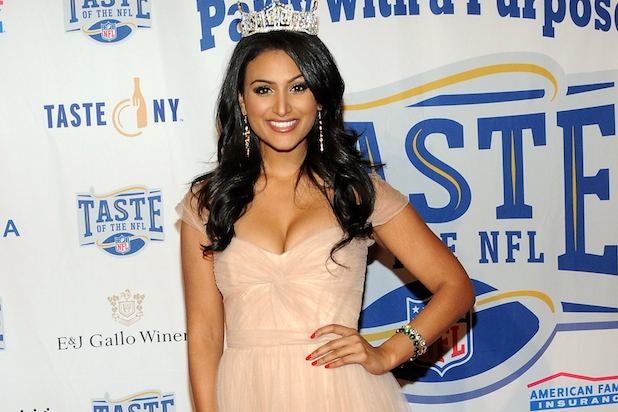 A Pennsylvania high school student was suspended this week for having the balls to pursue the American dream of securing a prom date with Miss America herself, Nina Davuluri.

18-year-old Patrick Farves was cheered on by the student body at Central York High School in York, PA when he approached Davuluri with a plastic flower in hand in the middle of an assembly. School officials, however, were not pleased, and he was immediately taken to the principals office, where he received a three-day in-school suspension.

The exchange — which the administration warned Farves against beforehand after getting wind of his plan, according to the York Dispatch — has gained national attention, and inspired students to protest the punishment under a #FreePatty Twitter hashtag.

In response, the school released a statement explaining the decision to punish Farves for following his dream.

“It is not our practice to discipline a student for asking someone – even Miss America – to a school dance. However, it is our practice to set expectations for student behavior, to communicate those expectations and rules to students and families and to ensure those rules are followed within our schools,” the statement reads. “Yesterday’s event was a wonderful experience for our students and a once in a lifetime opportunity for our district, and it is a shame that the media wants to frame this story to sell papers and make headlines using a distortion of what actually occurred.”

Miss America released a statement, as well. Farves will still have to search for a prom date, but at least she was “flattered” and is on board with the #FreePatty movement.

“On Thursday, a student invited me to prom and gave me a flower while I was giving a presentation in York, Pennsylvania. I was flattered by the gesture although I am unfortunately unable to attend due to my travel schedule,” Davuluri wrote on Facebook. “I later learned of the disciplinary action taken and reached out to the school in hopes that they will reconsider their decision.”

The student — who will likely down in his high school class’ history book as “the man, the myth, the legend” — has accepted his fate, and understands why he was punished by the school.

“I don’t want to be the type of person to do something like that and then justify myself,” Farves told the York Dispatch. “All the people who were in [the assembly], they did a lot of hard work and probably spent a lot of time getting Miss American to our school, so I completely understand why they were frustrated.”