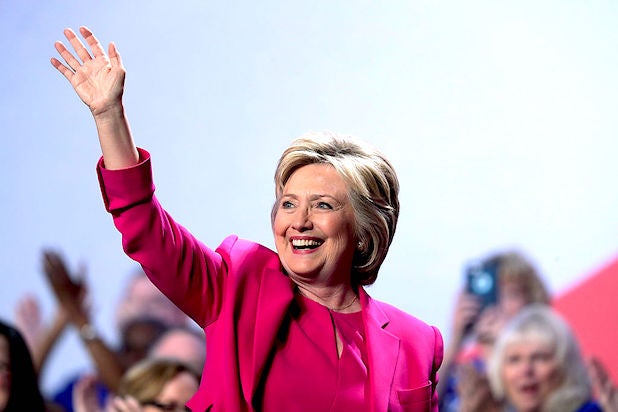 After a star-studded fundraising weekend in Martha’s Vineyard and Cape Cod, Hillary Clinton arrives in Los Angeles on Monday for another round of high-wattage Hollywood fundraisers, as well as a Monday taping of “Jimmy Kimmel Live!”

Clinton will start off her fundraising tour at the home of NBA legend Magic Johnson and his wife Cookie.

The Johnson event will be followed by another big bash at the home of media mogul and longtime donor Haim Saban. The event will be co-hosted by Saban’s wife Cheryl as well as Disney CEO Bob Iger, L.A. Olympics bid chief Casey Wasserman, Jeffrey Katzenberg and his wife Marilyn, Willow Bay, and MarketShare founder Jon Vein and his wife Ellen Goldsmith-Vein. Tickets for the event start at $2,700 per person or, if you raise $27,000, you can be a co-host. For the dinner tickets are going for $100,000 per couple.

During President Obama’s “Kimmel” visit last year, Hollywood Blvd. and Hawthorn Ave. in Hollywood were closed to traffic in all directions from about 4:30 p.m. until just before 6 p.m., but there is no closure plan from the Secret Service or LAPD. Such measures are typically reserved for the standing president and vice president.

On Tuesday, the Democratic nominee will stop for a luncheon at the home of Justin Timberlake and Jessica Biel, after the couple stepped in for Leonardo DiCaprio. The “Reverent” star was originally set to host the event but had to cancel last minute because of scheduling issues, according to his publicist.

The event costs $33,400 per ticket and will be co-hosted by Jennifer Aniston, Tobey Maguire, Scooter Braun and his wife Yael, Shonda Rhimes, and ICM Partners’ Chris Silbermann.

After that, Clinton zips over to Laguna Beach for two more fundraisers.

All of the Los Angeles events are sold out, a person with knowledge of the fundraisers told TheWrap.

On Wednesday Clinton heads up to Silicon Valley where she’ll attend a fundraiser at the home of CEO Tim Cook. And next weekend, Clinton stops by the Hamptons, where she’ll be rubbing elbows with Jon Bon Jovi and Jimmy Buffett.