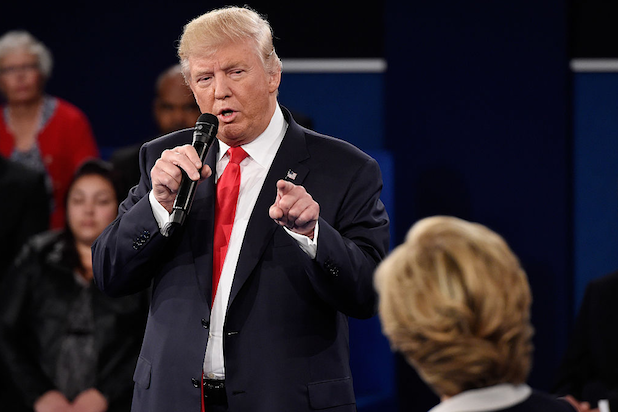 Hillary Clinton came out on top over Donald Trump in their second presidential debate, according to a CNN instant poll Sunday night.

Poll respondents favored Clinton 57% to 34%, according to CNN.

But 63% said Trump did better than they expected he would. CNN said it polled viewers who actually watched the debates, as opposed to a national survey of all voters. That sample skewed slightly Democratic, according to CNN.

Trump came in to the debate after dominating the news cycle for 48 hours with a leaked tape from 2005, where he was heard engaging in lewd sex talk with “Access Hollywood” host Billy Bush.

The debate had hardly begun when Trump apologized for the comments on the tape, repeatedly calling it “locker room talk.”

But the rest of the tone of the debate quickly turned nasty.

Trump threatened to punish Clinton if he became president: “You’d be in jail,” he said. He repeatedly accused her of lying and said she had “hate in her heart.” Clinton, for her part, repeated her assertions that Trump did not have the temperament to be president and said the lewd sex talk revealed in a 2005 tape leaked this week revealed exactly what Trump’s character is like. She said Clinton had attacked Latinos, Muslims and many others as well as women.

According to a poll on the conservative-leaning Drudge Report, Trump won the debate, by a lopsided 90% to 10% margin.