A good lesson in peddling rumors. Hall writes again to say that Bill Keller was indeed in her office yesterday, but they were discussing Sifton’s new position as restaurant critic, not giving her a new job. Sounds like it’s safe to say that what I heard ain’t happening, and that the search for a new culture editor is on.

There may be some weird game of musical chairs going on in the back section over at the New York Times.

We hear it’s Trish Hall, former food writer and now dining editor (photo by Earl Wilson/NYT), who will replace Sam Sifton as the culture editor at the New York Times. Sifton is moving out of the coveted cultural position into the much more fun job of being the restaurant critic. (Replacing the talented Frank Bruni.)

(Updated Thursday 7:45 am:) But a spokeswoman for the Times said Thursday no one had yet been chosen. "We haven’t picked a next culture editor. We’ve just begun the search," said Catherine Mathis. And Hall has emailed me to say all she knows is chief editor Bill Keller is looking for a replacement. So, perhaps it isn’t Hall, or isn’t her yet. 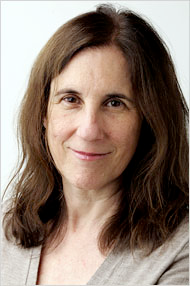 Whoever it is will have some rebuilding to do.

That’s because the past week has not been fun in the culture section of the Times. Both Sifton and television critic Alessandra Stanley have been subject to a public flaying the likes of which has not been seen for some time.

Public editor Clark Hoyt, no less, took Stanley to task for seven (eight, but seven on her account – because at the Times, they do tot this stuff up) errors in her tribute to Walter Cronkite, published just after the legendary newsman died.

“The newspaper had wrong dates for historic events; gave incorrect information about Cronkite’s work, his colleagues and his program’s ratings; misstated the name of a news agency, and misspelled the name of a satellite,” wrote Hoyt.

“The Cronkite episode suggests that a newsroom geared toward deadlines needs to find a much better way to deal with articles written with no certain publication date.”

Sifton called the lapse “a disaster, the equivalent of a car crash.” Stanley , a close friend of managing editor Jill Abramson, was contrite: “There are no excuses,” she said.

Actually, it’s just damn embarrassing. (And Stanley writing that Cronkite stormed the beaches on D-Day, then saying “I didn’t reread it carefully enough to see people would think he was on the sands of Omaha Beach,” sounds a lot like an excuse.)

Plenty of journalists on sites like Jim Romenesko’s have been asking why an error-prone critic, however brilliant, has been able to keep her job.

The new editor gets to inherit all this and more.

On the paper’s site it says she is “a former editor of the Real Estate, Sunday Business, Living (the precursor to Dining) and Escapes sections, and was for several years a food writer for the paper. Previously, she wrote for many magazines and newspapers about food, real estate, design and travel as a freelancer, edited for Martha Stewart Living, and was a reporter and editor for The Wall Street Journal.”

Who ultimately gets the job of culture editor will matter a great deal to those who cherish the Times’ commitment to film criticism and intelligent reviews of all culture, both popular and snooty.

But as far reporting on the world of entertainment, that has increasingly moved into a "media pod" led by editor Bruce Headlam.

So take your complaints over box office coverage to him.