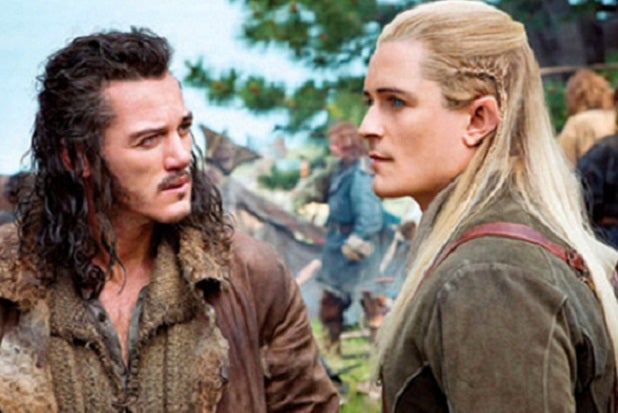 The furry-toed heroes of “The Hobbit: Desolation of Smaug” are about to leave a huge footprint at the foreign box office.

The first film in Peter Jackson’s Middle Earth trilogy, “An Unexpected Journey,” ran up more than $1 billion at the global box office last year – with $700 million of that coming from international.  That’s a tough act to follow, but Warner Bros. executives  think this one could be even bigger overseas, and most analysts agree.

We’ll find out starting Wednesday, when “Smaug” opens in France, Sweden, Belgium and a handful of Norwegian countries. By Friday, it will have rolled out in 3,903 U.S. theaters and will be in roughly 50 foreign markets.

There are solid reasons for the optimism. The foreign market has grown significantly, even since last year, especially in China and Russia. The buzz on “Smaug” has been more positive than the first film, with critics far more keen, and the high-frame-rate film debate is much less of an issue.

As in the U.S., the pre-release tracking has been strong and steady. And while “Smaug” will be face significant competition domestically from moves like “Anchorman 2,” “Saving Mr. Banks” and “American Hustle” in the next couple of weeks, none of those films are likely to get in the Tolkien tale’s way abroad.

“We’re very pleased with the way things are setting up for us internationally,” Warner Bros. domestic distribution chief Dan Fellman told TheWrap Tuesday. He’d know, having overseen the rollouts of the “Lord of the Rings” movies and the first Hobbit saga, which have brought in nearly $5 billion at the global box for Warner Bros since 2001.

The initial “Smaug” rollout will actually be smaller than that of the first film, with six or seven fewer markets in the first-weekend mix, so apples-to-apples comparisons won’t work. The studio has delayed the release of “Smaug” until closer to the Christmas holidays in Latin America, and it won’t hit Japan until February. A date for China is still pending, but it will be in 2014.

The highest-grossing overseas markets for “Unexpected Journey” were Germany ($88 million) and the United Kingdom ($78 million). China brought in nearly $50 million and Russia roughly $44 million, and Warner Bros. is hoping “Smaug” will make significant gains in those countries, both of which have seen big jumps in the number of screens available over the past year.

The ticket premiums on 3D and the high-frame rate — about 2,500 screens will feature the format internationally — will help, too.

The film’s world premiere was held last week in Los Angeles, and its European premiere was Monday night in Berlin.