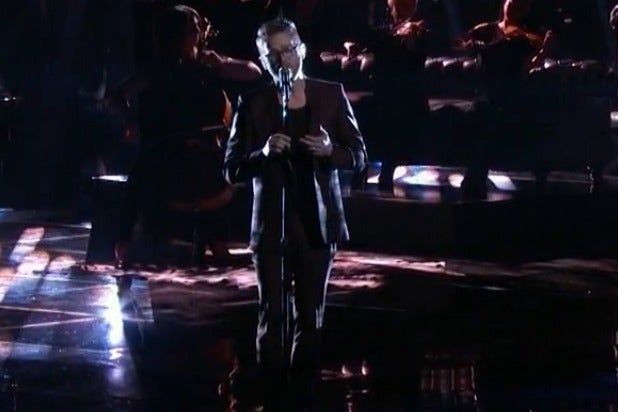 After a brutal cut last week, NBC’s “The Voice” is giving us two songs for each of the remaining five artists – one coach pick and one contestant pick. Now put on your finest muumuu, open a frozen cheesecake and let’s talk life, love and this week’s top 5 (sorry, I’ve been watching a lot of “The Golden Girls”).

Adam Levine is channeling the lead singer of Everclear. Shakira is reigning queen of her Mary Kay conference. Blake Shelton is everyone’s cool, fun uncle. Usher is onstage rocking his shiny shoes, but really – who cares what he’s wearing?! Look at him dance!

Usher opened the show with his single “Good Kisser,” a sexy, sweaty performance that probably made the ladies watching at home very happy. In case you forgot, little children, THIS is how you sing and dance at the same time.

In the most awkward product placement of the night, Mark Wahlberg showed up to promote the new “Transformers” movie, accompanied by a stiff blonde who looked to be all of 16. Y’all, I LOVE Imagine Dragons, but I can’t get behind this.

4. Nothing foolish about these song choices

Team Shakira’s Kristen Merlin kicked off the night with her refreshingly upbeat pick “Gunpowder and Lead.” It was good to see her be more playful and high energy, but her real breakout moment came later with her coach’s pick “Foolish Games.” While it had a couple of pitch issues, it was still lovely, emotive and entirely sincere, the kind of connected performance that may turn the tide for this underdog. Smart choice, Shakira!

5. The night belongs to Josh Kaufman

My favorite performances this week both belonged to Team Usher’s Josh Kaufman. Josh’s song pick, the gorgeous “All Of Me,” was stirring, subtle and pitch perfect. It took a track I didn’t find particularly memorable and made it touching and compelling. Josh later covered Usher’s choice, “Love Runs Out,” and killed it with a high energy, high-octane performance so good it might render the original (a song few have heard) somewhat superfluous. I can see that Josh has been taking performance notes from his coach, and I am loving the end results.

6. The gift that keeps on smelling

In an underwhelming practical joke that fell flat as a pancake, Adam had a pile of manure dumped onto Blake’s truck in response to last week’s staged cell phone melee. This could have been hilarious if 1- it looked like more than 2 buckets worth or 2- It was, ahem, a bit more “fresh.” Despite the poo, Blake is still in the lead for calling Adam “Barney Rubble” and “Sharon Stone” with a straight face.

I have to wonder if all that bleach has seeped into Adam’s brain, affecting his decision-making ability, because his song choices for Kat Perkins and Christina Grimmie were more miss than hit this week. Sia’s “Chandelier” was too avant-garde and restrained for Kat, giving her no room to show off her voice and really rock out, while Christina’s rendition of “Hide and Seek” was odd and disconnected. I love the idea of Imogene Heap, but her tone is ethereal and laser focused, and her music was a poor match for Christina’s robust, pop/soul vocals (despite the vocoder’s best efforts). No amount of blustering bravado from Adam about taking chances could undo the fact that these songs were ill fitting and poorly timed.

8. I see you took chandelier literally…

OK, producers – I see you took the song name “Chandelier” literally – surrounding Kat with multiple chandeliers and lingering on them lovingly throughout her performances. Point taken.

In what may have been one of the most enjoyable performances of the night, Team Blake’s Jake Worthington performed his pick, the Waylon Jennings’s classic (and “Dukes of Hazzard” theme song) “Good Ol’ Boys.” While it didn’t have the same swagger as last week’s “Hillbilly Deluxe,” it was still a barnburner and a great fit for Jake’s Southern sensibility.

I was hoping Kat Perkins would redeem her coach’s poor song choice by picking something incredible herself, so imagine my disappointment when she announced she’d be performing “Let It Go,” a tune that’s now been covered my everyone and their 3-year-old niece. Like Adam’s selection, this song didn’t really allow Kat to, well, “let it go” enough to show off the fire and range that’s earned her a twitter save two weeks in row. I’ll admit, I’m nervous about her chances this week.

Christina Grimmie’s “Some Nights” didn’t totally redeem her coach’s choice, but it was still a step up from “Hide and Seek.” The Fun song was a little too staccato and rhythmic for her vocals to really cut through, but she still managed to carve out some nice moments in the last half, hitting those crazy high notes only she can manage live. We can also thank this performance for the wonderful image of Blake giving serious feedback while gently holding balloons. Happy birthday to me!

Jake Worthington’s “Heaven” was a pretty brilliant idea on Blake’s part. Yes, it had some shaky moments, but it was a fun rock-country crossover ballad that sounded great on Jake’s voice, and honestly – who doesn’t love that song?? Blake told Jake that he’d be proud to share that stage with him for the rest of his life, and everyone at home watched them walk off into the sunset, holding hands. Blake + Jake FOREVER.

Who are YOUR picks for the Top 3? Leave your thoughts in the comments!

Don’t forget to check out my album “In & Out of the Dark,” available on iTunes NOW: https://itun.es/us/2BjbP. For more updates, follow me on Twitter: @katrinapmusic and visit my website, www.katrinaparker.com.