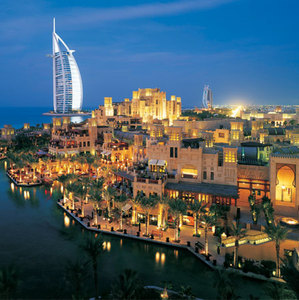 We should start calling it Hollywood East. The Abu Dhabi Media Company announced yet another major film fund today, this one a $250 million partnership with Jeff Skoll’s Participant   Media to make 15 to 18 feature films over the next five years, according to the release.

The deal was announced today in Toronto at the film festival between Edward Borgerding, of ADMC, and Jim Berk, the CEO of Participant.

This fit is not intuitive, I must say. Participant focuses on making socially conscious films, like "Darfur Now," and "An Inconvenient Truth," and "Syriana."

It’s not clear what Abu Dhabi is seeking to accomplish with this filmmaking fund. But outside financiers such as these are usually motivated by the allure of Hollywood glamour along with the dazzle of robust profit (and both are often ephemeral). Participant’s films, while noble in their intentions and often high quality in their execution, do not fall into this category. That said, this is a much-needed shot in the arm for independent film.

This is the second major announcement by the government-owned Abu Dhabi media venture in the space of a week, the first being a $1 billion filmmaking fund that will be divided among Hollywood studios. (See previous "New Money: Abu Dhabi Goes Hollywood.) We should be paying attention to the fact that this is a government-owned fund, what the implications may be in terms of the kinds of films that will be financed, and the cultural impact these films will be likely to have.

Perhaps Mr. Borgerding will enlighten us soon enough with insights into the motivation behind this flurry of funding.