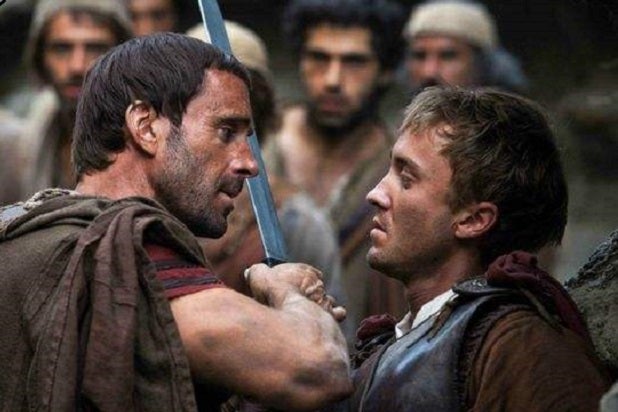 Amid the onslaught of superhero films coming our way this year is an equally big wave of faith-based films — movies in a genre that studios presumably see potential in since Sony’s successful Christian film “War Room” last summer.

This weekend marks the opening of “Risen,” which tells the story of the Resurrection through the eyes of a non- believer. Starring Joseph Fiennes and Tom Felton, “Risen” is first of several faith-based films going wide this year. Others include “The Young Messiah” (March 11) with Sean Bean and Isabelle Adjani; “Ben-Hur,” the remake of the 1959 classic directed by Timur Bekmambetov  and co-written by Oscar winner John Ridley (due out Aug. 12); and “The Shack,” starring Sam Worthington and Octavia Spencer (Nov. 18).

“War Room” grossed $11.4 million its opening weekend last August, and went on to hold first place for the next two weeks. In total, the $3 million film proved to be profitable for Sony; it grossed $67.8 million domestically.

“For our business as a whole, [faith-based films] helps bring a whole other audience to the movies, which is something we all want and the diversity of the product is really good for our business,” Rory Bruer, Sony’s president of worldwide distribution, told TheWrap.

Chris Stone, founder of Faith Driven Consumer, told TheWrap that religious-oriented films are so popular because of the large number of Christians living in America, as well as the numerous people who say their faith is the leading driver for most decisions in their lives, which includes deciding which movies to see.

Sony, distributor for “Risen,” is also responsible for distributing “Miracles From Heaven” on March 18, the same date it released “Heaven is for Real” in 2014. That film, with a $12 million budget, played well for the studio, grossing $91.4 million domestically.

“Sony is doing a pretty good job,” Stone said. “They are building a track record of releasing these relatively small-budget films.”

According to Stone, these films tend to be box-office hits because of their target audience while keeping a relatively low budget.

“It was a very well-done movie, and the important adjective to use about the film is ‘authentic,'” he added. “‘War Room’ came out and did very well because people like myself could see themselves in it. It’s an example of, ‘I didn’t live in the time but I could see that authentically happening at that moment.'”

This is why he believes many previous attempts at producing faith-oriented films have failed: because too many Hollywood-esque elements were added to take the film further and further away from authenticity.

In the case of Paramount’s $125 million 2014 biblical epic “Noah,” Stone said, “Darren Aronofsky (the director) put so much of himself into it — it just didn’t match contextually.” (Commercially, at least the film performed OK. It grossed a modest $101 million domestically, but earned $261 million overseas.)

For Stone, the problem with “Exodus: Gods and Kings,” Ridley Scott‘s 2014 film, “was that it was not authentic and it came after ‘Noah,’ so the stage was already set. The industry’s tentpole efforts of faith-oriented movies have not done well.”

Indeed, “Exodus” was a $140 million production that only grossed $65 million domestically. Additionally, it has a 27 percent “rotten” score on Rotten Tomatoes.

But religious films have also been playing well in limited release. “God’s Not Dead” opened in 780 theaters, and made $60.8 million off of a $2 million budget. “God’s Not Dead 2” was also produced on a modest budget of $2 million, and is looking to make around $42 million when it debuts April 1.

“The market is there, and if you look at places where Christian values are still important, those movies will do well,” Stone said.

Stone said he believes that any successful religious movie should follow two patterns: First, it needs to be authentic. “I cannot view the film with glaring holes where you have put something that doesn’t belong,” he said.

And Stone said it should come out in limited release before opening wide. “You don’t need for it to come out in 3,500 theaters,” he said. “You need a platform, and you need to start off slowly and let it build. You need to let social media and word of mouth do its work.”

“‘Risen’ is, at long last, the movie we’ve all been waiting for,” added Stone.

“Risen” is expected to debut at between $11 million and $15 million, ahead of the other film opening this weekend, “Race,” a study of Olympic sprinter Jesse Owens starring Jason Sudeikis, Jeremy Irons, William Hurt and Stephan James (“Selma”) , a young Canadian actor portraying Owens. “Race” is expected to open with about $10 million.