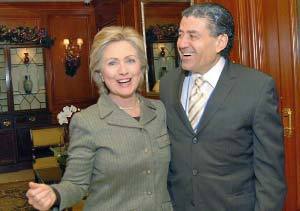 One of Hollywood’s leading Democrats, billionaire media mogul Haim Saban, has been one of Hillary Clinton’s most stalwart supporters. Now that his gal is out of the running, he is not close to being won over by Barack Obama. Saban has studiously avoided Denver this week, and said today he might even vote for McCain.

“I’m on the fence about what to do,” he said in an interview. Obama and Joe Biden are simply too liberal for him, he said. “I’m happy to pay taxes and smile,” he said. “I have no problem with liberals, except for national security. I will worry about health care, education, the Supreme Court after I know that I will be alive. If I’m not alive, do I care if I have health care?”

A Cairo-born Israeli-American, Saban has contributed vast sums to Democratic causes — $186,500 this year, together with his wife Cheryl – and has raised far more from his network of wealthy friends. Bill Clinton is on his speed dial. (Trust me, I’ve seen it.) But he thus far has not given a nickel to Obama, according to data gathered by the Center for Responsive Politics.

Apparently even with the addition of foreign policy veteran Joe Biden to the ticket, Saban does not feel confident with Obama at the helm in a dangerous world. He believes, the mogul said, that Iran is preparing a nuclear weapon to wield against Israel in the next two years, while Biden seems to believe that such a threat is a decade or more away.

“As a Jew, a Holocaust in the 21st century is unacceptable to me,” said Saban.

Let’s not get carried away: as a whole, Hollywood has gone crazy for Obama. But there is evidence that other Hillary supporters in Hollywood are similarly undecided, and might lean toward McCain. Stanley Gold, of Roy Disney’s Shamrock Holdings, has so far maxed out his contributions to the party, but given no money to Obama. Producer Stephen Bing has spread all kinds of largesse to Democratic candidates — $110,200 this year – but none to Obama thus far.

Observed Saban: “Like every American, I have 3 options: vote for Obama, vote for McCain, or do nothing. Like some of my friends, I’m sitting on the fence.” The nominee will have his work cut out.