Hollywood publicity firm Sunshine Sachs has canceled its annual, bicoastal holiday celebrations as a gesture of support for immigrants, women, LGBT people and the environment.

The decision was a gesture to “defend the values we hold dear,” according to an email sent Tuesday.

“We’ve been talking a lot about how to protect the things we care about, post-election,” CEO Shawn Sachs told TheWrap. The firm’s clients include companies like Facebook and stars like Natalie Portman, Ben Affleck and Leonardo DiCaprio.

Sixteen different organizations — including the ACLU, Human Rights Campaign and the Immigrant Defense Fund — will receive donations from a budget usually reserved for lavish parties in New York City and Los Angeles.

The company declined to disclose its party budget or the total amount of its donations. But the holiday events have been held in pricey venues and drawn up to 500 people on each coast — a mix of entertainment and media professionals, producers and the firm’s own clients.

This Thursday, Sunshine Sachs will close its locations (which includes branches in Washington, D.C., and Austin, Texas) and the staff will volunteer in groups for causes like a coat drive in New York City. At the end of the day of service, they’ll gather for modest celebrations in the office as “now is the time to come together,” said Sachs.

“However I felt the morning after was nothing compared to how I felt taking to people in this office, those who felt their citizenship — in a matter of moments — was gone or had been lessened,” Sachs said of November’s presidential election, which saw Republican Donald Trump defeat Democrat Hillary Clinton. “Being the diverse workplace we are, many of us felt under assault.”

Here’s the full list of groups getting a holiday donation from Sunshine Sachs: 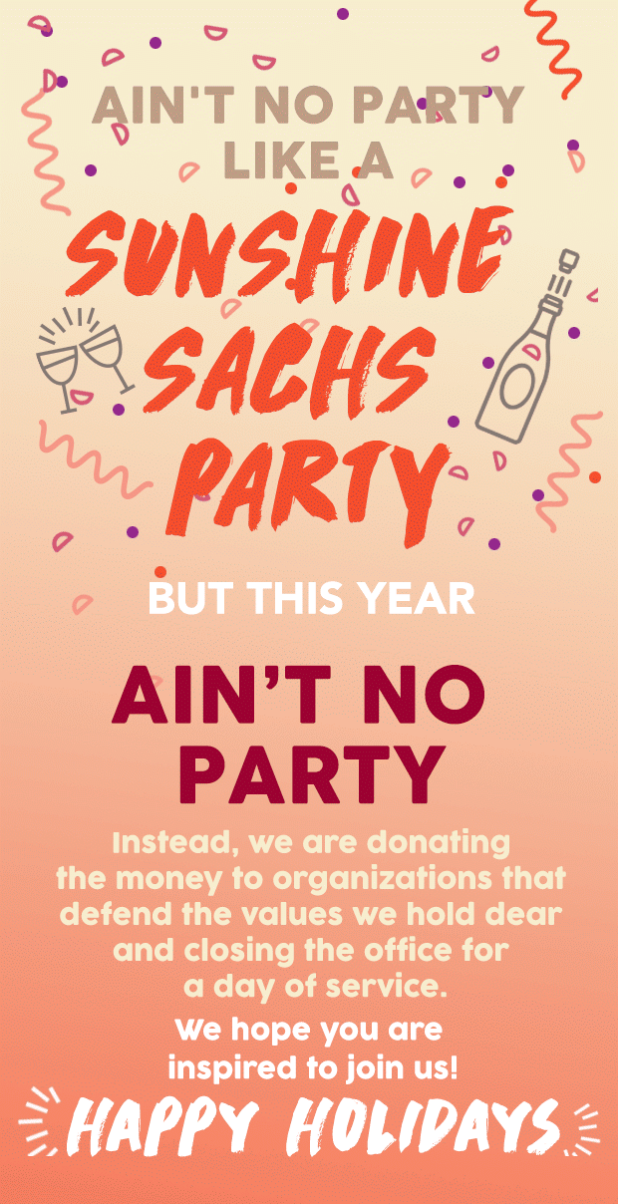