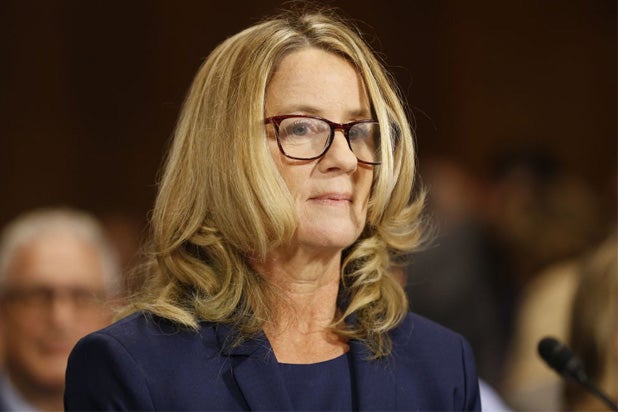 Hollywood celebs — like almost everyone else on Twitter on Thursday morning — are watching and weighing in on the testimony of Dr. Christine Blasey Ford — and their responses appear to be in support of Ford.

Ford told the Senate Judiciary Committee that Kavanaugh attempted to rape her and covered her mouth to prevent her from screaming at a Maryland high school party in the early 1980s.

“It was hard for me to breath,” Ford told the panel, “and I thought Brett was accidentally going to kill me.”

Also Read: Christine Blasey Ford Chokes Up at Kavanaugh Hearing: 'I Believed He Was Going to Rape Me' (Video)

The gripping testimony brought Ford a wave of support from several celebrities. “Dr. Ford is telling the truth. It could not be more clear,” Billy Eichner tweeted.

Dr. Ford is telling the truth. It could not be more clear. Thank you Dr. Ford for your courage today. It is a historic level of bravery.

Ellen DeGeneres said she was “in awe” of Ford’s bravery.

Dr. Ford, I am in awe of your bravery.

Mira Sorvino — who is one of the many women to accuse disgraced mogul Harvey Weinstein of sexual misconduct — said she found Ford to be “extremely credible and sympathetic,” and added that “her responses echo many of the feelings and reactions I have had over the years connected to my own sexual violence trauma.”

I find Dr. Blasey Ford extremely credible and sympathetic. I find her responses echo many of the feelings and reactions I have had over the years connected to my own sexual violence trauma and the aftermath of speaking out. I applaud her courage. https://t.co/K7HmLJL22l

Also Read: How Brett Kavanaugh May Have Overplayed His Hand With 'Virgin' Defense

Dr. Ford is a courageous and credible person. I have deep respect for her, and I thank her for her testimony.

I stand with Dr. Christine Blasey Ford today & always. Thank you for your incredible courage. You are a hero.

Kathy Griffin has tweeted several times about the hearing, including sending a simple “thank you” tweet.

Out of the blue, a hero steps up and I’m in awe. I know the pain of these kinds of memories, Dr. Ford. Memories that are indelibly imprinted on your brain no matter how many years go by. I, like millions of women across America, are behind you and thank you profoundly.

If you're struggling today, please see this thread of dog (plus cat, turtle, frog, camel, goat, and otter) pictures for some soul bleach. #KavanaughHearings https://t.co/5lWVtYEvEk

So far, two things are certain: 1) Christine Blasey Ford deserves every ounce of our respect, 2) This is the first time in Senate history that women have spoken more than men.

After hearing Christine Blasey Ford testify I encourage senators to move forward immediately and confirm her to the Supreme Court.

The testimony is potentially the first event to capture all 10 of the top 10 trending topics in the United States. Here’s how you can watch the rest of the hearing.