The Hollywood Reporter and several other Nielsen entertainment titles are set to be sold to James Finkelstein’s News Communications Inc., owner of  “Who’s Who” publications and the Washington, D.C.-based trade, The Hill, according to an individual with knowledge of the negotiations. 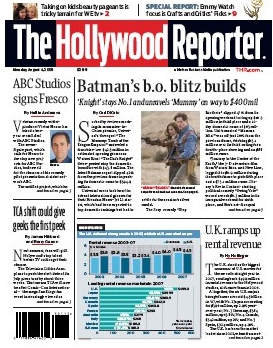 The historic Hollywood trade paper has been quietly for sale since the middle of last year, along with 41 other trade papers in Nielsen’s Business Media division, including Billboard, Backstage, Adweek, Brandweek, Mediaweek and Editor & Publisher.

The individual said that the Reporter, along with Billboard, Adweek, Brandweek and Mediaweek – which all have been struggling mightily in the past year – were to be sold.

Asked to confirm the report, Gerry Byrne, who heads the entertainment division of Nielsen Business Media, wrote in an email that "(I) really have no comment off or on" the record.

A message left at News Communications was not returned.

It has been a brutal period in magazine publishing, and for business-to-business trades in general. The Hollywood Reporter in particular has suffered huge fall-offs in revenue, readership and even online followers.

The Reporter has gone through a series of successive cutbacks in staff, leaving a skeletal editorial team running the once-flush operation.

Several reports have suggested that the Reporter would be abandoning its print version in the near future. The daily has run very few print ads and Hollywood studios have cut back severely on their traditional “for your consideration” Oscar campaigns, the source of much of the trade’s annual revenues.

Individuals knowledgeable about the state of the trades said that all of Nielsen’s entertainment titles were suffering. “Billboard is doing so-so, Adweek is not doing well at all, and THR is not  great,” said this former senior Nielsen executive. “The B-to-B market has just collapsed. “

The Reporter’s compatriot in the space, Daily Variety, has also suffered huge — though less severe — setbacks. Its parent company has put other trade publications, though not Variety, up for sale in recent months.

WaxWord broke the story more than a year ago that The Hollywood Reporter was for sale.

Over the last nine months many companies have looked at the opportunity to buy the titles, now owned by six private equity firms that acquired the Nielsen Company in 2006 – the Blackstone Group, the Carlyle Group, Hellman & Friedman, Kohlberg Kravis Roberts, AlphInvest Partners and Thomas H. Lee Partners, known collectively as Valcon.

It is unclear what Finkelstein’s plans would be for the trades.  He started in publishing while a student at New York University working for his father, Jerry Finkelstein, publisher of the New York Law Journal–founded in 1888–as well as a number of New York-area newspapers.

In the late 1970s, as president of The New York Law Publishing Company, the younger Finkelstein founded The National Law Journal. A 1998 press release announcing the sale of NLJ to American Lawyer Media Inc. said it was Finkelstein’s "vision, accompanied by occasional yelling and arm-waving, that eventually produced the largest legal newspaper in the country."