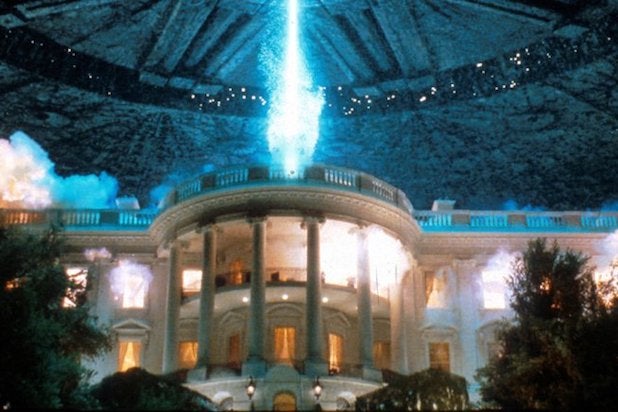 What many first thought was a pipe dream and maybe even a distraction from other issues, Vice President Mike Pence formally laid out plans for President Trump’s Space Force program on Thursday.

Hollywood had previously let the president know how it feels about Space Force, but now that the concept is looking like a reality, some celebs have “volunteered” their services.

“As the star of ‘Muppets From Space,’ I’ll be expecting an offer to join the Space Force very soon,” Kathy Griffin jokingly tweeted along with a clip of her from the Muppets film.

And of course Griffin wasn’t alone. Seth MacFarlane, Ike Barinholtz, Edgar Wright and George Takei were among those who weighed in on Twitter who shared their thoughts of the idea, suggesting everything from other names for the program to just wondering if our country’s priorities are in the right place.

“What the f— is a space force just give people health care,” Barinholtz said in an all caps tweet.

Trump officially directed the Defense Department to start formulating a proposed sixth branch of the military to be ready by 2020. The White House has also pushed Congress for an additional $8 billion in defense spending on space systems over the next five years.

“To be clear, the Space Force will not be built from scratch, because the men and women who run and protect our nation’s space programs today are already the best in the world,” Pence said in his remarks from the Pentagon Thursday.

You can even vote on an official logo for the Space Force, and Trump himself tweeted his support of the program Thursday morning.

See some of the online reaction to the Space Force below.

If “Space Force” were a TV show, the writers would keep pitching on a better title.

WHAT THE FUCK IS A SPACE FORCE JUST GIVE PEOPLE HEALTH CARE https://t.co/1O2qY8MQu2

As the star of Muppets From Space, I'll be expecting an offer to join the Space Force very soon…I assume they're going to ask me to lead the whole program. pic.twitter.com/7Smt9lKouK

I dunno, I like the recruitment posters for Space Force… pic.twitter.com/0nlsdWgHHz

Who needs a Space Force when you have Slim Whitman records? pic.twitter.com/ZTaK5ZmXMJ

Nothing but respect for *my* Space Force pic.twitter.com/vMsQzHveMA

they said my midichlorian count was too low 🙁 https://t.co/YDfuZLHDPD

Share the plot of your dumbest fucking idea in five words https://t.co/9BFDpq92Nx

BREAKING- Scott Baio has been appointed to the Space Force although he has not been around stars since 1986.

It is official that on Space Force’s first mission Mike Pence will not be allowed to visit Venus alone.

“Howdy. I’m a Trump voter and I support Space Force. I’ve barely been out of my county, but want us to spend $8 billion on outer space. Not having health care is a small price to pay for all this winning. MAGA!”

I don't want a Space Force.

I just want us to stop bankrupting future generations.

A complete list of every big name the actor has duped, trolled and hoodwinked

Since the announcement of Sacha Baron Cohen's new Showtime series, "Who Is America?" several politicians, including Sarah Palin and Joe Walsh, have said that they were tricked into talking on-camera with the actor's many aliases. They aren't alone, as many other public figures have been deceived by Baron Cohen into appearing in (sometimes unflattering, but always uncomfortable) onscreen moments.