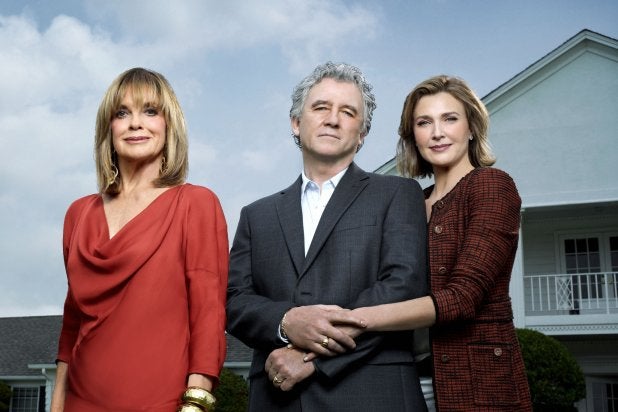 The entertainment industry rolled out a little bit of Hollywood to Capitol Hill on Wednesday showcasing exhibits, stars, producers and technical artists to deliver a message that the movie industry is far more than the stars who walk down the red carpet.

At the three-hour “Beyond the Red Carpet” reception sponsored by the House’s Creative Rights Caucus and held in the House Cannon Office Building that drew 32 congressmen, “Dallas” stars Patrick Duffy and Linda Gray, and “Breaking Bad” actor R.J. Mitte, joined industry executives in a series of forums.

Both U.S. Rep. Judy Chu, D-Calif., co-chair of the caucus, and MPAA chairman and CEO Chris Dodd made little secret of their hopes to use the event to improve Capitol Hill support for movie industry issues  ranging from piracy to tax credits.

“I hope it will lead to much greater awareness of the people behind the scenes and what they do,” Chu told TheWrap. “I hope that they can see how much work it takes to put a production together.”

She said that while Congressmen are certainly aware of the movie industry, they too often view the industry as being the final entertainment product and not an industry that employs people.

“People weren’t all that aware of the movie industry. They see the product, but they don’t understand all that goes into it,” she said. “What we want to do is show piracy affects real people and their jobs.”

Dodd said the event which was supported by MPAA members as well DGA, the Independent Film & Television Alliance, IATSE, SAG-AFTRA, and the National Association of Theater Owners, was intended to give House members a better understanding about the entertainment business.

“It was to entertain and stimulate and let people see some of the things we are talking about in real words, rather than just by reading things,” he told TheWrap.

Dodd said that the MPAA isn’t seeking piracy legislation from Congress any more.

“The world is changing at warp speed. We are not going to legislate or litigate our way out of it,” he said. “We are going to innovate our way out by educating people about the hard work of people.

“In this space everyone has to contribute to ensure that peoples’ content can be respected. Instead of finger pointing at everybody and arresting 14-year olds, the answer is making our product accessible in as many formats and distributive services as possible at price points they can afford. We are discovering that works.”

At the event, various interactive demonstrations included the opportunity to be pictured with an Oscar, as well as booths that featured a makeup artist turning a woman into a sea creature and demonstrations of animation.

Sharp  and Morgan pointed to how piracy has made it harder for producers to presell box office revenues from overseas markets to help finance the costs of making a picture.

Duffy noted that TNT’s revival of “Dallas” not only provided movie jobs but boosted tourism to the Dallas area. He said that since the new series started airing in 2012, tourism to South Fork Ranch has tripled, leading to additional hotel rooms and car rentals.

Jean Prewitt, president & CEO of the Independent Film & Television Alliance (IFTA), said the entertainment industry is one in which people have to fight to have jobs tomorrow.

“This is not an industry where anyone has a guarantee. Everyone gets up every day and has to compete,” she said. She suggested that kind of competition is the epitome of the American economic system and should stand as a hallmark for the rest of the world.”

For the record: A previous version of this story misidentified Jean Prewitt’s job title. TheWrap regrets the error.