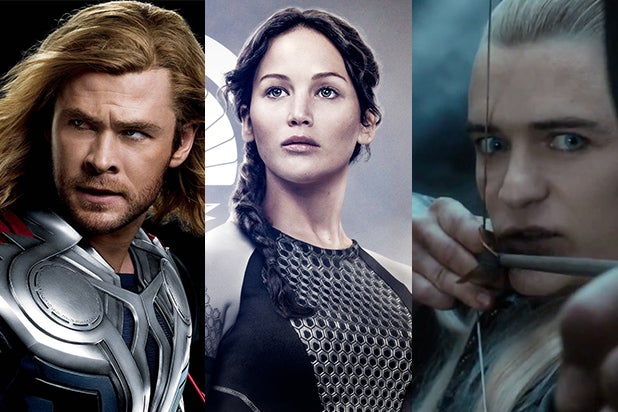 Hollywood’s hit movies haven’t connected at the overseas box office the way they did last year.

While the overall international numbers are comparable but down — $12.3 billion this year to $12.6 billion in the first nine months of the year – the overseas grosses of the top 20 films are off from 2012 by 16 percent, according to box office tracking service The Numbers.

Things are almost certain to get better.

The figures don’t include three movies that will have a major impact: “Thor: The Dark World,” “The Hunger Games: Catching Fire” and “The Hobbit: The Desolation of Smaug.” Disney’s Marvel superhero sequel has already taken in more than $320 million abroad, but those grosses will show up in the fourth quarter, as will the other two films’.

Nonetheless, with the foreign market growing so quickly, particularly in Russia and China, any drop seems surprising — especially since the domestic box office is poised for another record.

“I still think that this year should catch and surpass last year’s grosses,” The Numbers founder and chief executive Bruce Nash told TheWrap, “but it could be closer than we might have expected.”

Most of the drop-off is attributable to this year’s biggest movies not matching the numbers last year’s did. The top 2012 film overseas, “Marvel’s The Avengers,” brought in $891 million. That’s considerably more than the $803 million that “Iron Man 3” grossed abroad.

Similarly, this year’s No. 2 film “Fast and Furious 6,” totaled $549 million, compared to the $718 million that the animated hit “Ice Age: Continental Drift” totaled last year. Ditto for “Despicable Me 2,” which also rolled up $549 million, well short of the $631 million that “Dark Knight Rises” took in abroad.

“The emergence of domestic film industries, particularly in China, is becoming another factor,” said Nash.

Two Chinese films – “Journey to the West: Conquering the Demons” and “Lost in Thailand” – are in the top 20. And even if the local movies don’t travel as well as those two did, their presence in the market can cut into the grosses of the U.S. blockbusters, Nash said.

Disney has the No. 1 and No. 4 movies (“Iron Man 3” and “Monsters University”) and Universal has the second (“Fast and Furious 6”) and third (“Despicable Me 2”), but the wealth is otherwise spread around. Warner Bros. has four films on the list, while Paramount and Fox had three each.

It was a mixed bag in terms of genre. Four animated movies and four sci-fi films made the list, there were three superhero movies and three comedies – “The Hangover III,” “Lost in Thailand” and “Journey to the West.”