Peppered with questions about the possibility of finally generating revenue, Twitter co-founder Biz Stone announced that the company would be introducing many significant changes, such as providing businesses with effective ways of using the site and possibly even traditional advertising.

“One of the things we really want to do is to have a positive impact on the world,” Stone said. “The only way we can do that is by making tons of money. We’re not in this to be altruists. We need to have an extremely profitable self-sustaining company in order to do well in the world.”

Stone noted that the company would be seeking to improve primarily in two ways – by generating revenue and providing the consumers with a more complete and useful experience.

The revenue strategy focuses on helping businesses big and small use the site, whether letting Dell sell computers with Twitter or having a bakery tweet its pie of the day.

Though the conference attendees wanted to know about revenue, the consumer experience is where Stone feels Twitter has even more room to expand.

“The level of awareness is way bigger than the level of engagement right now,” he said.

“We’re a two year old company so we don’t want to be that child actor that got success early and grew up all freaky. We want to be Ron Howard,” he added.

Twitter was created in 2006, but it was not until the past year that it became one of the internet’s most popular sites. Stone said that as a result the site had limited resources and was still only 1 percent of what he felt could be accomplished.

“We spent a lot of 2008 just trying to get ahead technically of the unexpected popularity,” he said. “That was a bummer because we weren’t delivering a lot of value to our users.”

Stone wants to position the product not as a rudimentary social tool but as “a communication and information network for discovering what’s happening right now.”

He said this could involve anything from promoting the most important posts on a certain subject to linking search results. Thus far, Twitter has grown most as a tool as news happens such as the elections in Iran, a service Stone thinks will be unaffected by profit seeking. 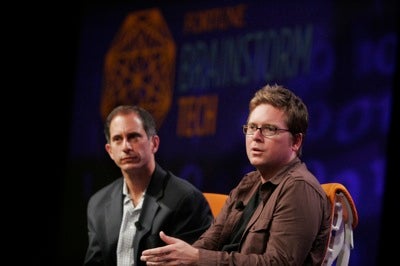 The new CEO of America Online, Tim Armstrong, outlined a five-point strategy for resurrecting the ailing Internet giant on Thursday.

Meanwhile, AOL’s former boss — Jon Miller, the new digital chief of NewsCorp – said his strategy for the media conglomerate will focus on creating premium experiences in a world overwhelmed by free content.

“If it isn’t premium and differentiated you are certainly not going to pay for it,” Miller said at the Fortune Brainstorm tech conference in Pasadena. “But I’ve seen that there are experiences now that people are recognizing as premium. Some experiences need to be paid for.”

Miller, who joined News Corp on April 1 after being ousted as the CEO of AOL in November, 2006, outlined an Internet vision in which premium content finds regular revenue streams, while broad, commoditized content still struggles with monetization.

He said a two-tiered system was quickly emerging on the Internet. "You’re seeing the world split into a premium world"… and a broader, consumer-based world, Miller said. 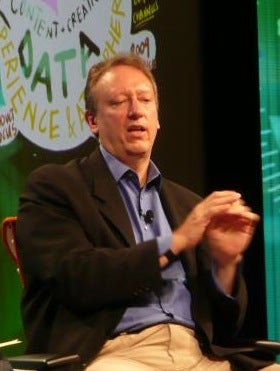 He also hinted that NewsCorp might be in the market to acquire a video gaming company.

When asked where else media conglomerates should expand, he said NewsCorp was missing a videogame division from its array of companies and hinted that might be a likely acquisition target.

"That’s the missing piece in the equation, especially when you see how much time is spent playing games online," Miller said.

Miller envisions MySpace, which NewsCorp. owns, as one of many platforms for those games. MySpace has struggled with the rise of other social networking sites like Facebook and Twitter, but Miller believes its future rests in entertainment and media.

"MySpace since its inception has had a meaningful impact on how pop culture becomes defined," Miller said.

Thanks to social networking and more direct interaction with customers, identifying what content consumers will pay a premium for is becoming easier, he said.

"You can have products you revise daily, weekly, hourly based on data you are getting in," he said.

And he urged content companies to focus on specialization, as this is critical to creating premium content for which consumers might be willing to pay. "You must develop specialities," he said.

Miller said the Internet and content business was at a key moment of change, that in the future would be regarded as a watershed moment.

"We’ll look back at 2009 and say this was emergence of the real-time web," he added, referring to the use of Twitter in Iran’s political turmoil, for example. "It’s when you could see pieces of the puzzle technologically, and behavior being started to be adopted" to match.

He also said that NewsCorp was not currently looking at acquisition targets, despite his comment about video gaming.

After 100 days as the CEO of AOL, Tim Armstrong responded to doubts about the company’s future, saying he was focused on improving the customer experience, looking at acquisitions and moving aggressively into improving technology for still-popular AOL products such as Mapquest.

In just his second public speaking appearance since taking over as the CEO, Armstrong said he has spent his first 100 days formulating a new business strategy that would help AOL reassert itself as an internet giant.

“Our house right now needs improvement,” he said. “What we’re hoping to be is a leading player … There are a lot of assets people don’t think about or recognize” as part of AOL, he said. 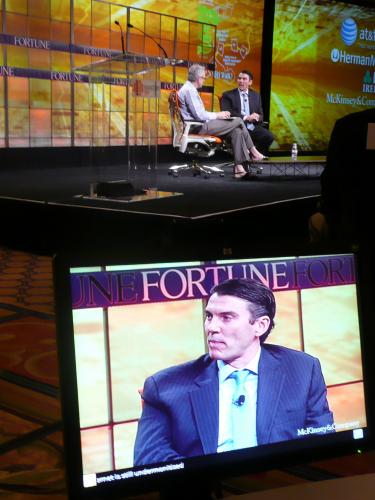 Armstrong took on the challenge of turning around the once-formidable Internet giant after running ad sales for Google. Once a dominant player, AOL has seen its consumer traffic steadily decline in recent years, and was recently spun off of Time-Warner as a drain on that media conglomerate.

Armstrong listed five areas where he was focusing immediately, with an emphasis on finding new areas of producing revenue: How to monetize owned and operated content; how to scale advertising; improving local mapping with Mapquest; messaging; and AOL ventures focused on content.

“At the core level, can we improve our products and services for consumers?” Arsmtrong asked. “The answer is 100 percent yes.”

AOL’s revenues are expected to be at about $3.2 billion this year, down a precipitous 38 percent in two years. Once the dominant portal for consumers, the outdated giant now has 6.2 million customers for its dial-up service, but about 200,000 cancel their service every month, according to the New York Times.

Armstrong said he was investing heavily in improving AOL’s technological expertise. He mentioned that he would move the company into "white spaces" of opportunity on the Internet, including creating better content management systems.

"Is there an opportunity for more sophisticated content management systems to liaise with advertising? That’s a white space we’re going to work diligently on."

He added that Mapquest had missed an entire generation of technological advances, and that AOL was focused on upgrading the service.

AOL has also moved to build original content businesses, hiring journalists and editors across different subject areas. Internet content is “undermonetized as a whole,” said Armstrong. Monetization has to go up, he said.