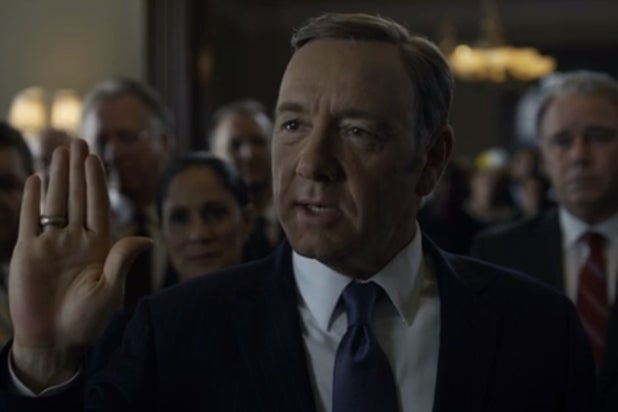 “One heartbeat away from the presidency and not a single vote cast in my name — democracy is so overrated,” Frank Underwood opines in opening of “House of Cards” Season 2 trailer.

In the dark, devious clip, released Monday by Netflix, the Kevin Spacey character continues to fend off political conspiracy and provide cunning asides to the camera as he assumes office of Vice President of the United States.

The trailer also features updates on the lives of the vengeful Claire Underwood (Robin Wright) and shaken Zoe Barnes (Kate Mara), as well as cameos by numerous cable news personalities.

“There is but one rule: hunt, or be hunted,” Underwood concludes in the video, as he breaks the fourth wall and welcomes viewers back to the madness.

Season 2 of “House of Cards” premieres in its entirety on Netflix on Feb. 14.