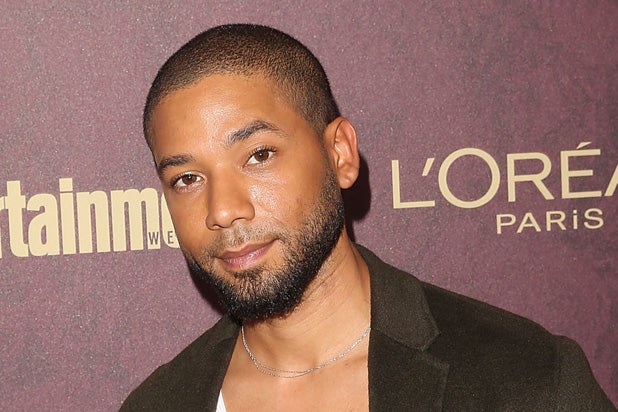 Jussie Smollett surrendered himself at 5 a.m. CT on Thursday morning and was arrested on the felony charge of filing a false police report. A few hours later, Chicago PD gave a breakdown of the timeline and evidence that led to Smollett’s arrest, after the “Empire” star reported himself as the “victim of a hate crime,” including a $3,500 check they say Smollett used to pay his partners to fake the Jan. 29 assault.

Commander of Area Central Detectives Edward Wodnicki said Thursday morning during a press conference that police interviewed Smollett at Northwestern Hospital following the reported incident, where he told them two offenders “yelled racial and homophobic and political statements at him and beat him, put a noose around his neck, and threw bleach on him and then fled from the area.”

Smollett — who plays the openly gay Jamal Lyon on Fox’s hip-hop drama — was not seriously injured, according to Wodnicki, but had bruising and scratches.

It was then that Wodnicki says police launched a “full scale investigation” into the “hate crime.”

Also Read: Cops: 'Empire' Star Jussie Smollett Staged Attack Because He Was 'Dissatisfied With His Salary'

“We quickly found two persons of interest on video that we believed were the likely offenders in this case,” Wodnicki told reporters, referencing — but not specifically identifying — brothers Olabinjo (“Ola”) and Abimbola (“Abel”) Osundairo. “We initially put out a ‘seeking to identify’ and we got this out in a community alert. We then started searching the area for video cameras and witnesses that could help us with our investigation. During that time frame we interviewed over 100 individuals in a canvas of the area and a followup canvas as our investigation expanded.”

“We located approximately 35 of our Chicago Police pod cameras in the area and in the areas that we determined these two persons of interest fled,” he continued. “We additionally found over 20 private sector cameras, and I gotta say that was super useful in this investigation. The city came together to investigate and help the police with this crime. It was because of these pod cameras, our investment into technology in the city of Chicago and the great assistance from the community in giving us those other cameras that led us to a really solid timeline of where our two persons of interest went.”

“So in short, we were able to track them initially, initially forward — so after the crime we were able to see that they fled in a particular direction and eventually got into a cab. Our investigators located that cab, interviewed the cab driver, got some video out of that cab, followed that cab using all of these surveillance cameras that are located throughout the city, the pod cameras to an area up on the north side where they abruptly stopped the cab, got out and walked on foot. Again, the community came together to provide us with security footage from their private cameras.”

Also Read: Fox Says It Is 'Considering Our Options' After Jussie Smollett Arrest

“So at that point we then started tracking these two persons of interest backwards, backwards to where they came from,” he said. “So we followed them walking around and eventually back to where they had gotten out of a cab. So that was another individual that we had to interview and another individual where we sought interview. We continued to track that cab back to the point where the cab was tracked down by our two persons of interest in a ride share car. We then followed up on the ride share and that was the lead that we needed in order to identify the two persons of interest. At that point we had a real good timeline of where these two people went, we were able to put a name to both of these individuals and it was at that time that we started looking at where they went right after this event.”

“We tracked them to going to O’Hare Airport and jumping on a flight to Nigeria,” Wodnicki said. “Our investigation led us to determine that they had purchased a roundtrip ticket with them returning to Chicago on [Feb.] 13th, so approximately two weeks after the incident. So that gave us a couple of weeks to try to continue to follow up on any investigative lead that would help us try to determine what happened in this incident. So while we were waiting for them to return we executed over 50 search warrants and subpoenas working with our partners in the State’s Attorney’s office, phone records, social media records, and records on individuals to help us illuminate the likely facts that occurred in this event.”

“So moving forward to the 13th, we had a team in place working with the FBI, customs, and our partners out at the airport,” he said. The police were able to identify Ola and Abimbola Osundairo — both of whom turned out to have worked on “Empire” — when they entered back into the country and took them into custody, where Wodnicki said they initially asked for an attorney.

After they were brought to detective headquarters for processing, Wodnicki said the brothers’ attorney, Gloria Schmidt, showed up.

“She came to us and after speaking with these two people of interest, she said that something smelled fishy, she did not think that they were the offenders as were reported. She worked with us very, very closely to get to the point where she came to me and said, ‘You really need to talk to these guys. I’m going to allow you to give them a video interview with us present and we’re going to have you hear their story. They are not offenders, they are victims.’ It was at that time that this investigation started to spin in a completely new direction.”

“You’ve heard some of the statements that their lawyer, Ms. Schmidt, has made and it was at that time that we took the information that these two individuals provided to us and we substantiated the timeline and the details that they gave to us in this interview. We were able to substantiate those things, we worked very, very closely with the State’s Attorney’s office. We had been working very, very closely with the State’s Attorney’s office for over a week at that point and it was then on the 15th, Friday the 15th, after approximately 47 hours of them being in custody and hours of them meeting with us and telling us their story and documenting their story did we release them without charging and I classified them as no longer suspects or persons of interest, and as witnesses.”

“So as is typical with any investigation one would typically lock these witnesses into a grand jury statement. Monday was a holiday, the 18th, Tuesday was the first day we could attempt to do that. So we scheduled an appointment with the grand jury, working again very closely with the State’s Attorney’s office on this, and as you know at the last minute Jussie’s lawyers called and said that they had evidence to postpone the grand jury that they wanted to provide to us. It was at that time that they called us, and I met with them, with a team of our detectives, and essentially they gave us no new information, so I reported that back to the State’s Attorney’s office and it was at that time that we locked in both of these witnesses to the grand jury. I’m told they did an excellent job and then the State’s Attorney’s office approved charges against Jussie for the Class 4 disorderly conduct, false police report.”

“We met with Jussie’s attorneys and we arranged for him to turn himself in and as you all know, he turned himself in at 5 o’clock this morning in the first district in Chicago.”

Chicago PD Superintendent Eddie Johnson added that a piece of “evidence” the police currently have against Smollett is the check they say the “Empire” star gave the brothers in exchange for staging the assault.

Fox network and studio, the homes to “Empire,” said in a statement after the press conference: “We understand the seriousness of this matter and we respect the legal process. We are evaluating the situation and we are considering our options.”

Smollett’s lawyers did not immediately respond to TheWrap’s request for comment on the details revealed by police during the press conference.