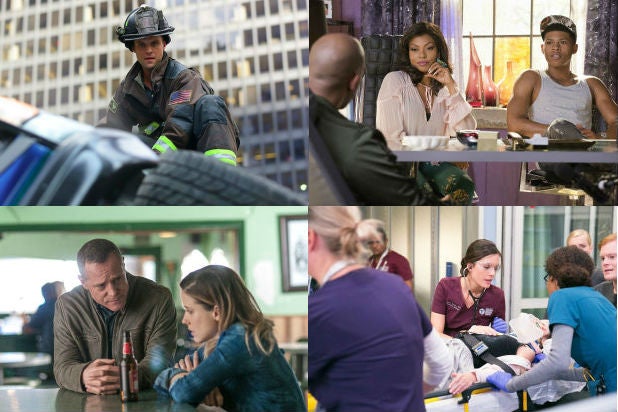 “We make it easy and affordable for people to work here,” Rich Moskal, the director of the Chicago Film Office, told TheWrap. “There’s a 30 percent tax credit on local expenditures–so crew, talent, local vendors, any local money. It does not include out of town expenditures. It’s very specific to incentivize the use of Illinois crew, talent, and assets.”

Those incentives and more led Wolf and his production company, Wolf Films, to create a new franchise outside of New York-based “Law & Order” brand — one based in Chicago.

“I remember shooting the pilot [for ‘Chicago Fire’] and Dick on the first day of shooting was talking about doing a spinoff with cops or a spinoff with a hospital,” Jankowski continued.

Wolf’s vision has definitely paid off. “Fire” and “P.D.” have been consistent ratings performers on NBC, and “Med” is proving to be no slouch either.

On the night it premiered Nov. 17, “Med” was the top scripted show of the night, debuting to a 2.2 rating/7 share in the advertiser-coveted 18-49 demographic, along with 8.6 million total viewers. For an imperfect comparison, that 9 p.m. debut was 29 percent above the Season 3 premiere of “Chicago P.D.,” which aired at 10 o’clock.

And no one is doubting the power of “Empire.” The show shattered ratings records during its freshman season and has continued to be the top scripted entertainment series on broadcast during its second, averaging 12.4 million viewers per episode heading into its midseason finale.

So why is Chicago proving to be such a popular filming destination?

“Chicago really does offer an extraordinary production value,” Moskal said. “The quality of Chicago’s talent pool of actors and experienced crew means that productions can hire almost entirely out of Chicago.”

Moskal also praised the city’s “relatively new” soundstage facility, Cinespace Chicago Film Studios, which has served all four shows currently filming in the city. “In fact those facilities are expanding,” he said. “That has grown our ability to accommodate and service multiple series.”