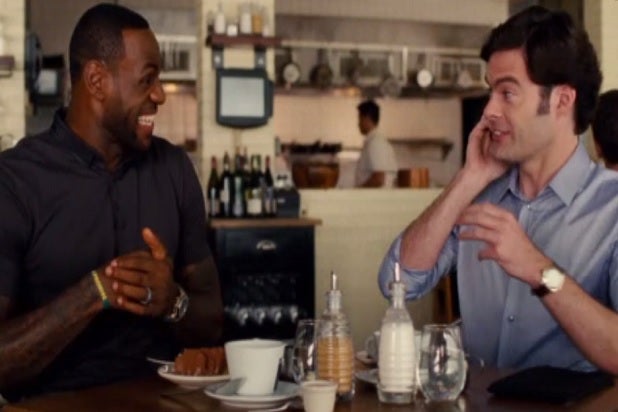 Just this past Thursday, the world saw LeBron James’ penis make a cameo on national TV and now they’re about to see a whole lot more of the basketball star during Sunday’s Game 5 of the championship series.

James makes a cameo in Judd Apatow‘s upcoming comedy “Trainwreck” starring Amy Schumer and Universal Pictures is wisely maximizing his appearance in special promos for the film that will be playing during the battle between the Cleveland Cavaliers and Golden State Warriors. Basketball fans who may have been unaware of the comedy before the championship series might even be under the impression that James is the star based on the way the trailers are playing up his role.

“The R-Rated ‘Trainwreck’ is a perfect candidate for exposure to the massive NBA Finals audience,” said Paul Dergarabedian, Rentrak’s media analyst. “It’s raunchy but sweet brand of comedy will play with audiences both male and female and LeBron’s featured role in the marketing of the film will further solidify the appeal of the film to a much broader range of moviegoers.”

The film in fact centers around Amy (Amy Schumer), a magazine writer who avoids commitment at all costs. But when she meets charming sports doctor Aaron (Bill Hader), she is forced to reassess her swinging bachelorette life style.

James appears as himself, playing a friend and client of Aaron’s. In a recently released promo for the film (below), James chastises Aaron for not coming to visit him in Cleveland. “Yeah, but that’s Miami,” Aaron says. “What’s the difference between Miami and Cleveland?” James replies. “It’s the same.”

Universal’s most recent release, “Jurassic World,” took in an astonishing $511 million globally during its opening weekend, breaking box office records as it did so. The studio also released “Furious 7” in April, which has grossed $1.51 billion to date.

Seems like the real winner of the NBA finals won’t be the Cleveland Cavaliers or the Golden State Warriors, but rather “Trainwreck.”