At long last, “Spider-Man: No Way Home” is upon us. The highly anticipated Sony Pictures release marks Tom Holland’s third standalone Spider-Man movie, and aims to connect Holland’s franchise with the previous two “Spider-Man” franchises in ways both known and unknown.

This being a Marvel movie, you already know there’s a credits scene. But how many credits scenes are in “Spider-Man: No Way Home?” Should you stick around to the very end or are you good to leave in the middle of the credits?

We’re here to warn you that you want to stay through the entirety of the “Spider-Man: No Way Home” credits, because there are two credits scenes in the film. There’s a mid-credits scene, as is traditional for most Marvel movies, but there’s also another treat for fans at the very end of the credits.

The story of “Spider-Man: No Way Home” picks up immediately where 2019’s “Spider-Man: Far From Home” left off. Tom Holland’s Peter Parker has been unmasked as Spider-Man, and has been fingered for the murder of Jake Gyllenhaal’s Mysterio. He goes to Doctor Strange (Benedict Cumberbatch) seeking his help, and they attempt to cast a spell that will make the world forget Peter Parker is Spider-Man. But when the spell goes wrong, villains from other universes start pouring into Peter’s world. 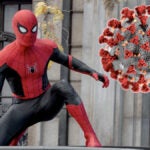 Also Read:
Spider-Man vs. COVID: Can ‘No Way Home’ Hit $1 Billion in Global Box Office During a Pandemic?

This paves the way for appearances from the likes of Willem Dafoe, who played the villain Green Goblin in Sam Raimi’s groundbreaking 2002 film “Spider-Man,” as well as Alfred Molina’s Doc Ock from the 2004 sequel “Spider-Man 2” and even Jamie Foxx as Electro from 2014’s “The Amazing Spider-Man 2.” And then of course there are the rumors and speculation that others from past Spidey movies might be making appearances in “Spider-Man: No Way Home.”

Jon Watts returns as director from a screenplay by Chris McKenna and Erik Sommers.

So when you see the film (and judging by the box office presales most of you are), make sure you don’t miss out on both credits scenes at the end of the movie. “Spider-Man: No Way Home” opens exclusively in theaters on Dec. 17.