A version of this story about “News of the World” appears in the Oscar Nominations Preview issue of TheWrap’s awards magazine.

In one of production designer David Crank’s first conversations with director Paul Greengrass during preproduction on “News of the World,” Greengrass told Crank that he intended to shoot the whole film in sequence. This was partly in consideration of then-11-year-old Helena Zengel, who co-stars opposite Tom Hanks in the post-Civil War Texas Western. But the director also intended to capture the weather-beaten feeling of a travelogue as the characters move through the landscape.

“Paul’s background is in documentaries, and that still applies to his filmmaking today,” said Crank, whose art direction and production designer credits include “Knives Out,” “There Will Be Blood,” and “Lincoln.” “He wanted each location to feel like we were discovering a new place. Each town had a purpose, which led to a progression of how things happen in the story.”

Next-door New Mexico stood in for Texas during the shoot, and the crew was restricted to a standard-production 30-mile radius outside of Santa Fe. Incredibly, Crank and his team managed to stage three of the real places featured in the film — Wichita Falls, Red River Station and Dallas — all in one spot.

“The Bonanza Creek Ranch has been used as a movie ranch since the 1950s and has been built up over many years,” he said. “We planned carefully from the beginning so that when the characters arrived in a town, different parts of our set would stand in for completely different towns.”

Thus, there were three different entrances. When Greengrass would wrap on one sequence, Crank and his design team then had five days to transform the ranch into the next Texas town. “I spent the first 10 years of my career in theater,” Crank explained. “So this was like summer stock to me. And though we pre-figured each set, there’s a sort of slapped-together weirdness in the planning of that ranch. That jerry-rigged quality really did exist in these actual towns, so it was wonderful to work with.” 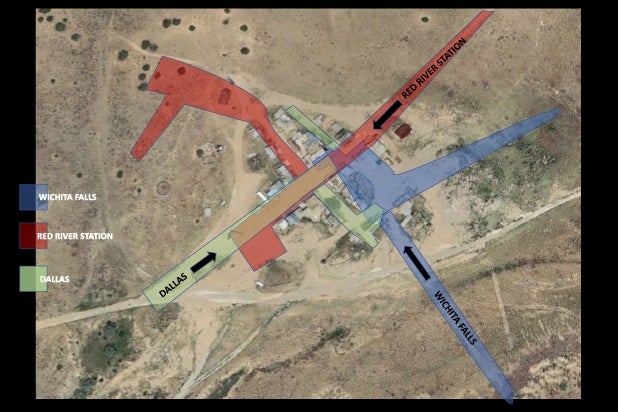 The character played by Hanks travels on horseback, reading newspaper articles to the Texas population. The people pay a small fee, not unlike nowadays, to get their information delivered. Greengrass strove for utmost authenticity in faking the news.

“Paul and I worked very close with the props department,” Crank said. “He was very particular about the actual newspapers and the graphics. There were originally 15 to 20 newspapers in the script, which got pared down a bit. We found a printer who used this great Japanese paper, which was the closest texture to match the real newspapers of that era.”

The papers were filled with genuine news articles from the time, but Crank instantly realized that the printers in 1870 were somewhat font-size challenged. “The print is like angels dancing on the head of a pin,” he said. “It’s so small. I remember asking Paul, ‘Should we make the print a bit bigger so that Tom can read it?'” 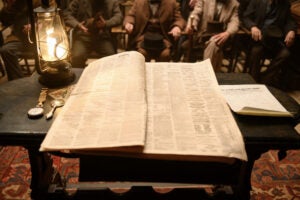 Greengrass, in examining the newspapers himself, reached for a magnifying glass. Which then in turn became an aspect of the Hanks character. “I don’t know for sure whether Paul or Tom came up with the magnifying glass, or if they came up with it together,” Crank said. “But it’s a brilliant touch.”

The film also features a fictional town called Durand, a ruined burg where Hanks’ character confronts a power-mad despot played by Thomas Francis Murphy (“The Walking Dead”). The production set up at Eaves Movie Ranch, where a parking lot was initially going to stand in for the town entrance, though Greengrass collaborated with Crank on rethinking the entry as a tight natural funnel shape, where the characters would squeeze through and then burst into the town’s strange world.

Also Read: Paul Greengrass Celebrates Christmas Opening of 'News of the World': 'We're Only Going to Recover by Daring to Release Movies'

Durand appears in the 2016 novel by Paulette Jiles, which “News of the World” is based on, but Greengrass wanted the sequence to churn with even more significance onscreen. “Paul raised it up a bit from how it was described in the book,” Crank said. “He wanted all the dead buffalo dumped around, the real sense of a ruined civilization. It’s in a great sense contemporary, horrifyingly.”

And some of a previous location was recycled, with a dark significance. “Durand is an ex-military camp where the army had left a vacuum,” Crank said. “We had a military camp earlier in the film and so we used some of the same items and elements to give Durand those echoes.” He added, “It’s always nice when you can put stuff in a truck and drive it to the next set.”