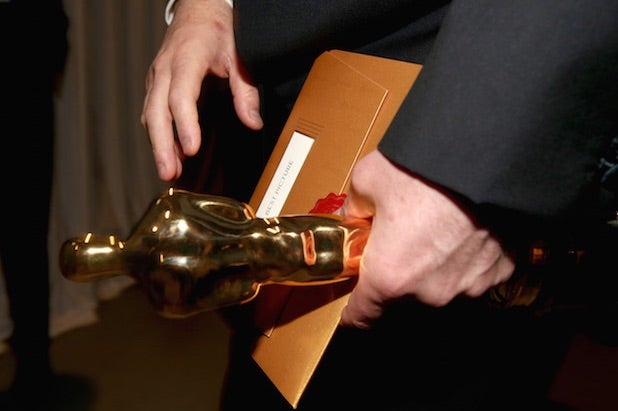 The fate of “La La Land” and “Moonlight” will soon be in the hands of the accountants. So will the fate of “Manchester by the Sea,” “Hacksaw Ridge,” “Hidden Figures,” “Fences,” “Hell or High Water,” “Arrival” and “Lion,” all of which are hoping to take Oscar Best Picture statuettes home from the Dolby Theatre on Sunday.

The Oscar voting deadline is Tuesday at 5 p.m. PT, at which point a small team of accountants from PricewaterhouseCoopers will get to work counting votes. In 23 of the 24 categories, their task will be straightforward: Academy members are asked to select one of the nominees, and whichever one gets the most votes wins.

And then there’s Best Picture, where things get more complicated. When the Academy expanded from five best-pic nominees to 10 in 2009, and then to a variable number two years later, it also changed the final voting in this one category to the preferential system (also called instant-runoff or ranked-choice voting).

I’ve tried to explain the Oscar Best Picture system several times over the years, so here’s this year’s explanation of how it works:

STEP ONE: Don’t vote, rank.
Unlike all the other categories, voters in Best Picture aren’t just asked to pick their favorites. Instead, they’re asked to rank the nine nominees in order of preference. This is important — because a voter who picks only one or two films runs the risk of wasting his or her vote completely.

STEP TWO: Find the magic number.
There are 6,687 voting members of the Academy this year. If every one of them voted, you would need 3,344 votes to win Best Picture. If 90 percent of them vote, you’d need 3,010. The real magic number is probably in between those two figures, based on what the Academy and PwC has said about voter turnout in the past. For the sake of this demonstration, let’s split the difference and say this year’s magic number if 3,177.

That’s the number that’ll get you more than 50 percent of the votes, which you need in order to win Best Picture.

STEP THREE: Stack.
Brian Cullinan and Martha Ruiz, the two ballot supervisors at PwC, handle this count themselves. In other categories, they divvy up the ballots among members of a small team, so that nobody sees the majority of the ballots in any category — but in this category, they have to do it themselves because there’s no way to tell when a winner will be declared.

To start, they take all the Oscar Best Picture paper ballots, print out the online ballots so they have a paper trail, and then begin making nine stacks of votes, one for each of this year’s nominees.

STEP FOUR: Count the biggest stack.
Let’s assume the biggest stack of ballots is for “La La Land.” (We’re speaking hypothetically here, but it’s a safe assumption.) How big is it? If it has 3,177 votes or more, Brian and Martha can go out for coffee and a donut, because their work is done and “La La Land” has won.

STEP FIVE: Find the smallest stack.
If, on the other hand, the top movie doesn’t have more than half the votes, as it won’t except in years of a real landslide, then the donuts will have to wait. The count continues by locating the Best Picture nominee in ninth place, the one with the fewest No. 1 votes. That film is now out of the running.

STEP SIX: Redistribute.
Every voter who put the last-place film at the top of his or her ballot now gets a second chance. I don’t mean to pick on “Fences,” but let’s say it has the fewest No. 1 votes. On every ballot that listed “Fences” first, the vote now transfers to whichever film was ranked second. (And if the voter picked “Fences” first and didn’t vote for anything else, that ballot is discarded.)

STEP SEVEN: Recount.
Once all of the last-place ballots have been redistributed into the piles of whatever films were in the No. 2 spot on those ballots, PwC recounts the ballots to see if anything has now passed the magic number.

By the way, our magic number will remain at 3,177 unless we’ve had to discard some ballots. But if, for example, two of the last-place ballots didn’t rank any other nominees and have to be thrown out, the magic number will go down to 3,176. (It’s always the lowest number that is more than 50 percent of the ballots that are in play.)

STEP EIGHT: Rinse and repeat.
If anything hits the magic number after the ninth-place ballots are redistributed, then the count ends and a winner is declared. If nothing reaches that number, then the accountants do the same thing again: Eliminate the last-place film, redistribute its ballots into the stacks of the films ranked second on each of those ballots, and recount to see if anything has now hit the magic number.

Eventually, a movie will end up with more than 50 percent of the vote. It might happen in the first round, when there are nine movies to choose from, or it might not happen until there are only two movies left. But eventually, it will happen.

If you’ve filled out your Best Picture ballot completely, it will give the answer to those questions all the way down to, Of these two films, which do you prefer?

There is absolutely no strategic reason to rank your film’s biggest rival last, unless you honestly think it’s the worst of the nominees.

Why do they have to make it this complicated?
With nine Best Picture nominees, a movie could theoretically win with less than 15 percent of the vote. The Academy wants to crown a film that has broad support from its membership — hence the preferential system.