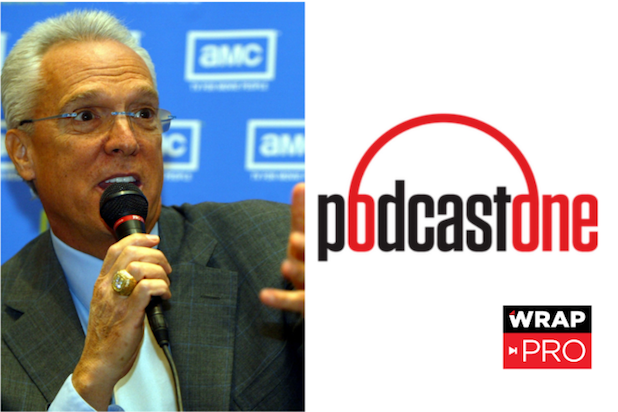 Even after a half century of work in the radio and podcasting business, PodcastOne CEO Norm Pattiz is still looking for his next crowning achievement: the second podcast boom, which Pattiz estimates will take place in the next few years and make podcasting a multibillion-dollar industry.

“There’s going to be a point, when podcasts become a line item in overall media budgets and plans. That’s when you’ll see the business really explode,” Pattiz told TheWrap.

Pattiz founded the podcast network PodcastOne in 2013 with a focus on celebrity or influencer podcasts. Some of its first podcasts were hosted by former WWE wrestler “Stone Cold” Steve Austin and former NBA All-Star Shaquille O’Neal.

“The Adam Carolla Show” is currently one of the network’s best in listenership. The Monday-through-Friday podcast that includes interviews with fellow comedians finished in the top 25 of most downloaded podcasts in 2018, according to iTunes. PodcastOne recently announced they have signed Carolla to a five-year extension.

The model for PodcastOne has remained influencers-first even as other networks like NPR and Parcast focus on narrative and scripted programming. The strategy works for PodcastOne, Pattiz said, because influencers can be in found in every category, allowing for every demographic in the podcast chart to potentially discover a PodcastOne show.

PodcastOne’s plan for the next podcast boom also includes going international. PodcastOne partnered with Australian broadcast network Southern Cross Austereo in September 2017. The Australian radio giant reported $653 million in revenue in 2018, according to the Sydney Morning Herald. Southern Cross Austereo chief executive Grant Blackley told the Herald that it estimates its investment in PodcastOne to break even and even become profitable this fiscal year.

While details of the deal are under wraps, Pattiz said he plans to continue brokering partnerships overseas in 2019.

Pattiz, 76, is perhaps best known as one of the founders of the radio network Westwood One, and his work with radio syndication led him to be inducted in the National Radio Hall of Fame in 2009.

In the fall of 2016, Pattiz came under fire over reports of  sexually inappropriate comments to comedian Heather McDonald. Pattiz later apologized to McDonald directly, telling TheWrap that it was “an unfortunate comment intended as a joke.” The comments would lead him to retire early as chairman of the University of California Board of Regents a year later, according to the Los Angeles Times.

Since the incident and the spread of the #MeToo movement, Pattiz said he is more aware of the importance of maintaining a healthy workplace environment. “It made it a top-line issue,” Pattiz said. “Anybody who doesn’t realize that the environment is different today than it was 10 or 20 or 30 years ago is behind the times.”

Pattiz spoke to TheWrap about how PodcastOne is preparing for the next boom, the difference between radio and podcast success and how he views his legacy.

We’ve been seeing all these new successful podcast networks coming up. What do you think about how fast the segment is growing and what challenges does that bring for PodcastOne?

Oh, yeah. With all of the attention that has been paid to narrative and scripted programming, while we have examples of those, our focus is influencers. The real connection with advertisers is knowing that consumers are influenced by the podcasts they are listening to.

Take Kaitlyn Bristowe from the 11th season of “The Bachelorette” and now the podcast “Off the Vine.” When Kaitlyn came in to see me, I had no idea who she was. I know who she is now. Our very first podcast we produced was for “Stone Cold” Steve Austin. I didn’t know much about wrestling before then. I sure do now.

Also Read: Here Are the Top Podcasts of 2018 on Apple Podcasts

To what extent are you paying attention to these podcast networks getting into business with TV and streaming services?

We not only produce programming that we think television and movies would be interested in developing, we are also interested in developing things from television and movies into podcasts. That’s the nature of our partnership with A&E. “Cold Case Files” is very successful for us. What we do is, A&E gives us all the raw material from the “Cold Case Files,” and we produce it to a half-hour podcast format. It’s not serialized. Every episode has a middle and an end.

You recently gave Adam Carolla a five-year extension. How similar is are talent deals to what you would do in radio in your time at Westwood One?

Podcasting is very different than radio, but for Carolla, I have a 40-year relationship with that guy. I greenlit “LoveLine,” about 30 years ago with Adam and Dr. Drew.

Adam was at the top of his game in radio. And then he went to podcasting and became the Guinness World Record holder for most downloaded podcast.

So is podcast success just another version of radio success?

If they are different playgrounds, does that mean podcasts will never be the new radio?

I don’t think that podcasting will be the new radio because of the differences in how we distribute it and the audience that consumes it. Now, had radio early on embraced on-demand and podcasting, then the perception of radio growing every year would have continued.

But now, we are going after the same dollars radio is going after. Our growth and the growth of the industry is coming from radio.

That being said, I am the biggest cheerleader for radio since I founded Westwood One almost 40 years ago. When I go speak at these conferences with radio and podcasting people, I tell them “you need not consider us a competitor.”

How can radio rebound?

Even though you think it’s a no-brainer, it’s tough to get someone out of their comfort zone. How did the music business originally adapt to Napster? They didn’t. It’s going to take time.

How do you view your legacy at age 76?

A couple of years ago, I was at Talkers Magazine’s annual get-together and they gave me a lifetime achievement award. When I accepted, I said, “Here’s the reality, after accepting the award, if I get hit by bus, no one would say he was taken at such a young age. What a crime.” What they’re going to say is, “He had an amazing life.”